Since 2011, when his last New York Times bestseller, IRON HOUSE, shot out of the gate, gripping readers and winning resounding praise, fans around the world have been waiting.

Five years later, phenomenal storyteller John Hart returns with his dark, gritty Southern fiction with a literary slant aptly titled, REDEMPTION ROAD (St. Martin’s Press/Thomas Dunne Books, May 3 2016). Trust me, if you want to feel as if you’re in the hands of a seasoned pro, get REDEMPTION ROAD, revel in it, and then wish you could write like that (or at least see all story elements that you’re sure to miss the first time around); the man can flat-out write. Set in small town North Carolina, REDEMPTION ROAD is all about tortured souls, traumatized children, corrupt law enforcers, and a serial killer. Toss in a little religious undercurrent, and it’s very emotionally charged powerhouse of a novel that will leave your head spinning. There’s so much going on in REDEMPTION ROAD, it’s challenging to summarize, but that’s the sign of a good book, at least in my opinion.

Elizabeth Black (Liz) is Hart’s first female protagonist and he writes her beautifully. She’s a loner and a giver, a fallen cop trying to do all the right things in the wrong ways. Her first (former) partner (Adrian Wall) has been imprisoned for the last thirteen years and is just about to be released when things to start happening. Could it be that Wall was wrongly accused of his crime? Elizabeth is determined to prove the justice system wrong. Meanwhile, in a cold, damp basement in an abandoned home lies a pretty rich girl badly raped and beaten. Her tormentors shot not once, or twice, or six times…but eighteen.

Way out yonder is an abandoned church. Bodies pile up at the altar. Some of whom have been missing. And why does Elizabeth hate her father so?

Join me as I welcome the only author to win the best novel Edgar Award for consecutive novels, John Hart.

Leslie Lindsay: John, it’s an honor to have you today. Thank you for taking the time to pop over. I’m always fascinated with what inspires an author to write a certain story at a certain time; so why REDEMPTION ROAD, why now, and what were some of your limitations?

John Hart: Hi Leslie. The pleasure is mine. Thanks for the interest in what I do. As I never write from an outline it’s hard to summarize any set of reasons explaining why I wrote REDEMPTION ROAD. I begin with an idea for the main character then try to find a story that allows deeper exploration of what fascinates me about that person. I never thought I would write a “serial killer story.” It’s not what I read. So Redemption Road, as it exists, was the merest glimmer of an idea when I began.

The original conceit was to write a modern retelling of The Count of Monte Cristo. I loved the concept of a good man made bitter and hard through wrongful imprisonment, and the

questions of what he might do once released. I wrote close to an entire book along those lines before realizing that I was telling the wrong person’s story. It wasn’t the released prisoner who fascinated me, but a young detective who’d always believed in his innocence. I started the book over, telling it as her story instead. She’s my first female protagonist, and I’ll admit to a certain trepidation in writing her. I’ve always believed, though, that if a writer is not working in a state of near-constant discomfort then the writer is not pushing the envelope hard enough.

L.L.: I understand you’ve stepped away from your previous career(s) as a criminal defense attorney, but REDEMPTION ROAD deals with so many criminal-like issues: corrupt police officers for one, prison abuse, catching the bad guys…did your background lead organically to the fictional construction of some of these grim realities?

John Hart: No writer should allow background experiences to limit what or how one writes. The world is too big, in my opinion, to simply “write what you know.” That said, there’s always some amount of reality that filters into a novel. My time around cops and jails and prisons certainly colors my perceptions about those worlds. Largely, I remain in terrified awe of the institutional callousness that – by necessity, I imagine – defines so much of life in and around our prison system. It’s easy to build on that reality, to demonize faceless authority and elevate systemic indifference to something brutal and cruel. That’s the beauty of fiction. We get to explore the things we love and fear and hate.

L.L.: I would classify REDEMPTION ROAD as a Southern literary thriller with a strong crime story at the heart. Yet it’s so very character-driven. Do characters sort of “present” themselves to you, or are they carefully cultivated? And you mention trepidation in writing Elizabeth (Liz) Black…I think that’s a normal response.

John Hart: I’d say that characters tend to present themselves, though I’d qualify that statement as oversimplification. So much of writing happens between the lines. Where do our thoughts go as we drive the car, mow the lawn, drift in and out of sleep? I’m always thinking about the book, the characters. What feels “presented” likely derives from more of a slow build than I might otherwise imagine. When I do “see” them though, I see them close to fully formed. That said, there’s always room to be surprised. And yes…the female lead of REDEMPTION ROAD was supposed to be a bit player. She had other ideas.

L.L.: And of course, I love the South! There’s something bucolic about the slower pace of life, the tie to the land, the sun dappling from wrap-around porches, and the connection of generations. Yet this story is dark, gritty. And so, too can the South be tormented. Can you speak to that, please?

John Hart: Life in the South involves all the good things you mention, but our past is

tortured and bloody. The shadow of slavery and racism lies over everything. So do persistent pockets of endemic poverty. The friction between haves and have-nots makes fertile ground for storytelling. Bear in mind, too, that memories of the Civil War are more vivid here. Cities were burned, families destroyed. That’s rich soil, too.

L.L.: You’re married, you have two daughters…I’m curious how your writing life blends with your family; it’s so challenging sometimes to turn off the stories in one’s head. And what do your kids think of their bestselling dad?

John Hart: I’ve learned to stay present when I’m with the family, and that’s not as easy as it sounds. Writing for a living means that the story is always in your thoughts. Sometimes its more real than the conversation you’re ignoring or the appointment you’ve just forgotten. If you’re making it as a writer then the world forgives those little sins. The same rule should never apply to family. If my daughter is playing hockey, I want to be there. When my wife speaks, I try hard to listen. Believe it or not, that’s a learned skill for a full-time writer. The books work because we immerse ourselves. As for my kids, I think “Dad” is just “Dad.” I go to work. I take out the trash. My career is rarely a topic of conversation.

L.L.: What’s captured your attention lately? What gets you out of bed in the morning? It doesn’t have to be literary.

John Hart: I’ve found my way to an appreciation of the simple pleasures in life. For me, that’s working on the farm. If it’s a pretty day, I can’t wait to hit my word count and get on the tractor. I like to keep the fields cut, the trails clear. My dogs are with me. There’re deer and turkey everywhere. It’s my zen.

John Hart: I’m wrapping final pages on my next book – THE HUSH – which comes out in July of next year. It’s a sequel to my third novel, THE LAST CHILD [click here to learn more]. It’s the first time I’ve revisited characters I know and love from an earlier book. It’s more fun than I thought it would be.

“Big, bold, and impossible to put down, Redemption Road had me from page one. John Hart is a master storyteller.”

L.L.: Is there anything I forgot to ask, but should have?

John Hart: You forgot nothing. The questions were perfect. I will take a moment to say what an absolute gift the writing life has proven to be. It’s isolating and lonesome at times, but I wouldn’t trade it for retirement, a pile of money or any other career. I consider it the ultimate expression of personal freedom, and encourage any aspiring writers to pursue it as passionately as I have. I wrote two failed novels before my third was published, and I know many famous authors with similar stories. Success in this business demands perseverance as much or more than it requires talent.

L.L.: It was a privilege to connect with you today, John. All the best!

John Hart: Many thanks.

For more information about REDEMPTION ROAD, or to purchase, please see links below:

ABOUT THE AUTHOR: John Hart is the author of REDEMPTION ROAD, and of four New York Times bestsellers, THE KING OF LIES, DOWN RIVER, THE LAST CHILD and IRON HOUSE. The only author in history to win the best novel Edgar Award for consecutive novels, John has also won the Barry Award, the Southern Independent Bookseller’s Award for Fiction, the Ian Fleming Steel Dagger Award and the North Carolina Award for Literature. His novels have been translated into thirty languages and can be found in over seventy countries. A former defense attorney and stockbroker, John spends his time in North Carolina and Virginia, where he writes full-time. 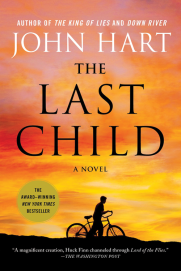 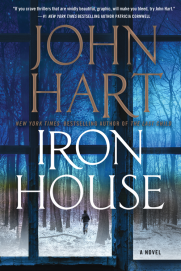 You can connect with me, Leslie Lindsay, through these various social media channels. Hope to see you around.