A daughter recollects her mother before she was her mother; her creativity, and ultimate psychosis. It’s about motherhood and mystery, how she fits into this intricate network, and more.

This is my mother before she was my mother. She had a thrumming, electric energy, as if her skin was embedded with diamonds, glistening with potential. In the
1970s when she met my father, she dreamed of happily-ever-after, flower boxes and
flat driveways filled with Big-Wheels and scooters, the giddy shrieks of children.
Together, they purchased a plot of land in a new subdivision, one that had a name like
Southern Hills or Southhall or maybe it was Westfield, a moniker resembling cardinal
directions. Something in her peripheral vision reflected mirth and yet, darkness. Her
blue eyes conveyed intelligence, but sadness, too.

She planned everything, prepared herself to be a homemaker, an artist, a
mother: a sewing machine, canvases for the walls, macramé plant holders dangling
from hooks on the ceiling. She culled through Butterick patterns at Cloth World and
emerged with palpable excitement into the blistering humidity, clutching a packet of
onion-thin patterns that she would fashion into a skirt, a blazer, a dress. She lied out
the fabric, smoothed the wrinkles with the back of her hand and ran her sheers along
the cloth. Here’s what emerged: stitches, a woven tapestry of her story, which then
cobbled together into something even greater—material that mattered.
In this house, I crawled through drawers of my parent’s nightstand, watered the
dandelions, wedged my body between the small space between the refrigerator and
kitchen wall. In my bedroom, I clamored inside my wood toybox, the one my father
lovingly built, and popped my head out in a game of peek-a-boo, my stuffed animals.

scattered among the floor. In this house, I cackled and squealed and rode bouncy
horse contraptions that might as well have been a death trap.
What was it with small, tight spaces? What did I seek to contain? Or extract?
All the while, I observed. I saw the dark days of my mother curled into a fetal
position on the couch, legs underneath her body, a plume of cigarette smoke
encircling her head. I saw the pinched lips, the twin lines of displeasure at the top of
her nose. What had I done? Anything? Did she still love me? At first, the slights were
just that: miniscule, nothing.
And then, twelve years later, she devolved into psychosis. Had it been there all
along, an insidious, subterranean urging, revealing itself years later, as if in
dormancy, like periodical cicadas emerging? She started saying I was the devil and she
needed to kill me. She thought perhaps she had slept with the postman and she didn’t
really mean to. She paced the house, smoking cigarette after cigarette, drinking
gallons of Diet Coke, hot tea. She called me a bitch. My mother believed she was God
and maybe an angel, too, she could fly and bring perfect unity to the world. My father
was beside himself. Exhausted. Weary. Together, we put my mother in the car and he
drove her to the hospital. She didn’t want to go. Nothing was wrong. My mother
attempted to exit the moving vehicle twice.

Just like the way you’d imagine, the people in white coats greeted our car. They
soothed her with their words, but she was suspicious, frightened. Paranoid. My throat
clogged. Tears burned and singed, but never once fell. I watched my mother was a
dark fascination; this was something I’d never witnessed.
My husband says, “You look a little like her; it’s a body language thing.”
3

I know. I do not like this.
He says, “This position, of your mother standing in front of the ‘sold’ sign…well,
I think we have a photo of you like this at our first house.”
Our first house was eighty-three years old when we moved in. We did not build
that house from a mound of dirt. We inhabited someone else’s shelter, adhering
memories and years of the past to our skin. Maybe then, we won’t become her. We
won’t. Our first house had nothing to do with South or West. It was located in
Minnesota, on a street that had ‘north’ in its address it was far away from the river of
insanity. We had openness. Large expanses of wood floors and picture windows, a
sweeping backyard filled with raspberry bushes, hostas, a sprawling tree. I didn’t need
to wrangle my body into a tight spaces, I no longer needed to observe.
Except myself. I feared what happened to my mother would happen to me. If we
looked alike, if we stood alike, spoke the same, would I become her? I watched. I
listened.
And.
Nothing. 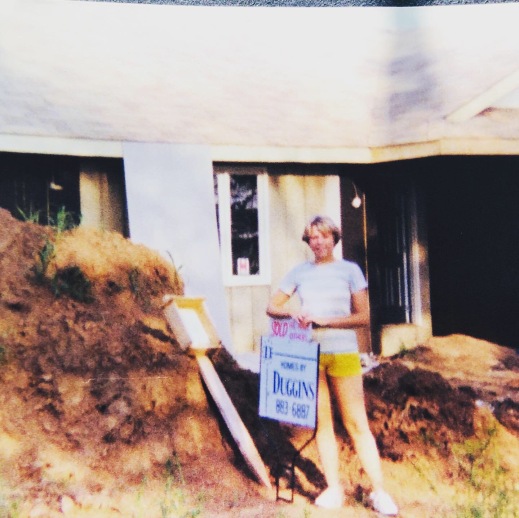 Buried within each of us is a glimmering strand of genetic material known as
Mitochondrial DNA. It’s presented from mother to daughter and mother to daughter,
and so forth. All women in every family are like a series of books, one building upon
the other, our genetic stories closely knitted.
To me, this is stunning, cohesive, and elegantly mysterious. The fact that we
are bound together in this way nearly kills me.
4

In Minnesota, I look over my shoulder. Is it catching? Her brand of illness? No.
But maybe, if it’s genetic. I worry she will come, present herself on my doorstep,
frighten my neighbors, take my children.
But she doesn’t. She takes her own life. On a summer’s day. In her home. On
the bed. In the back. Shoes on the floor. Her skin sloughs away. Her madness,
slipping, falling into some other realm where she is whole, nurtured.
I study my skin, pry at it, lifting, foolishly thinking I’ll glimpse the truth, the
cells that are hers. That are mine alone. I tip my face to the cosmos, let my head
become heavy with weight, as I relinquish my mother from my cells—plinking them
into the heavens.

Yet biology makes this impossible. We are forever cosmically interlaced.

[Portions of this piece are excerpted from my ms, MODEL HOME]

For more information, or to connect with Leslie Lindsay, please see:

ABOUT THE AUTHOR: Leslie Lindsay is a mother, wife, and writer living in Chicagoland. She is the award-winning author of Speaking of Apraxia (Woodbine House, 2012). Her work has been published in Pithead Chapel, Common Ground Review, Cleaver Magazine (craft and CNF), The Awakenings Review, The Nervous Breakdown, the Ruminate blog, Manifest-Station, The Mighty, and the International Bipolar Foundation. She has been awarded as one of the top 1% reviewers on GoodReads and recognized by Jane Friedman as one of the most influential book reviewers. Since 2013, Leslie has interviewed over 700 bestselling and debut authors on her author interview series. She is at work on a memoir. She is a former child/adolescent psychiatric R.N. at the Mayo Clinic.