Based on true events of the Sino-Japanese war, THE LIBRARY OF LEGENDS is a poetic and compelling piece of historical fiction.

Blending history and beautiful imagery, plus Chinese myth and folklore, THE LIBRARY OF LEGENDS (WilliamMorrow, May 12 2020) brings the past to light in this atmospheric tale. This is a captivating saga of a young woman traveling across China with a convoy of student refugees, fleeing the hostiles of a brutal war with Japan. Here is where I knew little of this piece of history. But this is all based on true events, taking place during WWII.

It’s 1937 and Japanese bombs fall on the city of Nanking when 19-year old Hu Lian and her classmates at Minghua University are ordered to flee. Together, along with about one hundred students, and staff, Lian must walk a thousand miles to safety while protecting a 500-year-old collection of myths and folklore known as “The Library of Legends.”

Unexpected bonds develop on this pilgrimage…a cautious romance, but also death and skepticism, a reunification, and more.

“The Library of Legends is a gorgeous, poetic journey threaded with mist and magic about a group from a Chinese university who take to the road to escape the Japanese invasion of 1937 – only to discover that danger stalks them from within. Janie Chang pens pure enchantment!”

I found the myths and folklore fascinating from both a cultural and literary standpoint, historical, too.

THE LIBRARY OF LEGENDS is about self-preservation, but also family and close bonds; in a sense, it’s about ‘chosen family’ and also a little of group behavior –what happens when individuals are seemingly thrust together under adverse situations.

Please join me in welcoming the lovely and talented Janie Chang to the author interview series:

Janie, hello and welcome. I understand you were inspired to write THE LIBRARY OF LEGENDS because of your father’s stories of his life as a refugee student traveling with his school, much like Lian. Can you talk more about what made you take the leap with telling this story? And also—just to be clear—while this is based on true events, it’s fiction.

Thank you for inviting me, Leslie! And to your second question, yes – while the historical events are absolutely true, and some of the incidents during the students’ journey are based on family stories and absolutely true, it is definitely a work of fiction.

As for taking the leap, well at any point in time, authors have about a dozen stories swimming around in our brains and honestly I’m never quite sure why one of them will surface and insist that they become your next book. In this case, I think it began with the refugee situation out of Syria – does anyone remember when that was the big global dilemma before Covid-19? And it made me think about the stories my father told me about his university years, when he was a refugee in his own country. His campus had to evacuate Nanjing before the Japanese attacked, and he walked a thousand miles with his classmates and professors, fleeing westward deeper into China, away from the invasion.

But I felt that the story of a refugee campus, even though the premise was compelling, still lacked the cohesion of a deeper theme. But I went ahead and began doing some research. Then I came across the account of a university that carried a set of rare books to safety.  Immediately I knew this was the thread I needed to tie their journey to the profound changes taking place in China. A priceless library being taken into exile – could there be anything better-suited or more versatile to use as a symbol?

I have to admit to being pretty naïve about this time in history. Most of what I’ve read (or watched) about WWII is set in Europe. I knew nothing about the Sino-Japanese War. And so, thanks for educating me. Are you finding that to be the case with other readers?

Don’t feel bad. I’m sure if we had grown up and gone to school in Asia, most of what we read and watched about WWII would be set there! People with parents who lived through the war in China would know about the evacuation of universities. My friends who grew up in Taiwan and China know. But outside China, it’s practically unknown. Some of my friends who are second-generation Chinese-Canadians didn’t know about this chapter in history.

And to be honest, before I started researching this book in earnest I only had a sketchy idea about that period of history – the sequence of events, the politics, how the massive refugee crisis during the war affected people’s thinking as well as their lives.

Plus there isn’t a lot that’s been written in English or translated. I hunted for books about the evacuation of Chinese universities and found a few memoirs compiled by former students, their experiences echoing my father’s. I learned that 77 of China’s 114 universities became refugee campuses. In a time of war and desperate shortages, this was a major undertaking to preserve the country’s cultural and intellectual legacy. It speaks volumes about the Chinese reverence for education.

So in fact what ultimately gave me the confidence to proceed with this novel was that every time I floated the idea past a friend or another author, they were fascinated by the exodus of universities and by the idea of saving a library.

Yes. In the world of the story, as in our world today, there are no guarantees that all the things you do to keep yourself safe will work; the situation changes every day. The students’ refugee experience is very specific if you think about it. Unlike individuals or families trudging along the road on their own, they belong to a larger community – their university – and they share a common purpose beyond just reaching safety. They are protecting the Library of Legends. And they are completing their education, which is their duty to their families and to the nation, because the government regarded these educated young adults as the people who would help rebuild China once the war was over.

My hope is that we draw closer to our communities rather than grasp at what we can for ourselves and our immediate families. That we offer each other moral and material support. That because of community and a shared purpose, we will come out the other side as better people in a better country.

I love the idea of protecting books. Which books do you go to time and time again for support, inspiration, and insight?

I think the struggle to protect a valuable book collection raises the stakes for book lovers. There’s a scene in a Tom Stoppard play, Arcadia, where a young girl, one of the main characters, learns about the burning of the Great Library of Alexandria and she bursts into tears. All book lovers can relate!

When I’m writing and get stuck, it never hurts to pull out a book on the craft of writing because you need reminding of the basics every so often– am I overdoing the backstory by putting it here in one big chunk, is there’s a way to trickle it in gradually? It helps you take a step back. Stephen King’s On Writing is a favourite and so is Jessica Page Morrell’s Between the Lines. There are authors I go to for inspiration with language and vocabulary because there are always times when it feels as though the right words keep slipping away. Or you need to words used in an unexpected way just to jolt your creativity. So I keep on hand books by Michael Ondaatje or Guy Gavriel Kay, who are also poets, no surprise. I also love Ami McKay‘s work, and more recently, Madeline Miller.

You toss in elements of fantasy, folklore, and myth in THE LIBRARY OF LEGENDS, which I love, by the way. What are some of your favorite—or most comforting—myths and why do you think we cling to them in times of struggle?

I’ve always loved fairy tales about doorways to a different world. Partly because my seven-times-great grandfather supposedly walked through such a portal and entered the world of immortals. I also adore fox spirits, which in Chinese mythology are shape shifters that enjoy changing into human form and sharing their lives with people. I think these myths retain their appeal because we all go through times when we wish we could have a fresh start, whether by leaving behind a troubled situation or by reinventing ourselves. Both fox spirits and a portal feature in a previous novel, DRAGON SPRINGS ROAD.

Janie, this has been so fabulous and insightful. Thank you for taking the time. Is there anything I should have asked, but may have forgotten?

They were all great questions, all very thoughtful. I really appreciated this time with you! Stay safe and stay healthy. 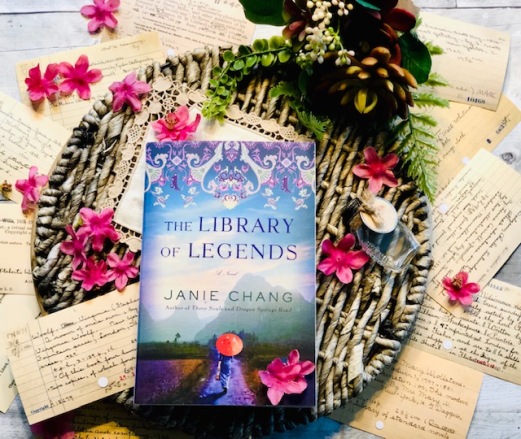 For more information, to connect with Janie Chang via social media, or to purchase a copy of THE LIBRARY OF LEGENDS, please visit:

You may find similarities between THE LIBRARY OF LEGENDS and Alma Katsu’s THE HUNGER (for the journey and some of the myth connections, group behavior), as well as BALZAC AND THE LITTLE CHINESE SEAMSTRESS (Dai Sijie). In terms of myth and folklore, you might also like Kate Hamer’s THE GIRL IN THE RED COAT and IN THE HOUSE IN THE DARK OF THE WOODS (Laird Hunt).

Janie Chang writes historical fiction with a personal connection, drawing from a family history with 36 generations of recorded genealogy. She grew up listening to stories about life in a small Chinese town in the years before the Second World War and tales of ancestors who encountered dragons, ghosts, and immortals.

Her first novel, THREE SOULS, was a finalist for the 2014 BC Book Prizes Ethel Wilson Fiction Prize and her second novel, DRAGON SPRINGS ROAD, was a Globe and Mail national bestseller. Both these books were nominated for the International Dublin Literary Award. Her third book, THE LIBRARY OF LEGENDS, is scheduled for release in April 2020

She is a graduate of The Writer’s Studio at Simon Fraser University and a proud member of Tall Poppy Writers, a tribe of authors with a mission to connect readers with great books while supporting some good causes. She is also the founder and main organizer of Canadian Authors for Indies, a national day of support by authors for independent bookstores, which ran from 2015 – 2017; this event is now run as Canadian Independent Bookstore Day by the Retail Council of Canada.

Born in Taiwan, Janie has lived in the Philippines, Iran, Thailand, and New Zealand. She now lives in beautiful Vancouver, Canada.

Leslie Lindsay is the award-winning author of SPEAKING OF APRAXIA (Woodbine House, 2012). Her work has been published in Pithead Chapel, Common Ground Review, Cleaver Magazine (craft and CNF), The Awakenings Review, The Nervous Breakdown, Ruminate’s The Waking, Brave Voices Literary Magazine, Manifest-Station, and others. Forthcoming cover art to be featured on Up the Staircase Quarterly, other images in Another Chicago Magazine (AJM), poetry in The Coffin Bell Journal, and CNF in Semicolon Literary Journal. Leslie has been awarded as one of the top 1% reviewers on GoodReads and recognized by Jane Friedman as one of the most influential book reviewers. Since 2013, Leslie has interviewed over 700 bestselling and debut authors on her author interview series. Follow her bookstagram posts @leslielindsay1. 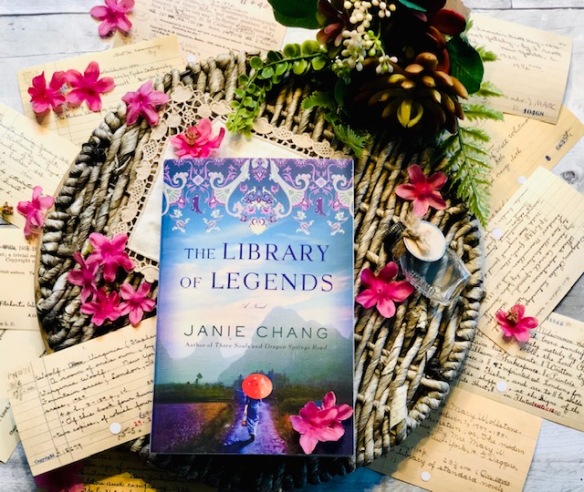 [Cover and author image courtesy of and used with permission. Artistic cover image of book designed and photographed by me, Leslie Lindsay. Follow on Instagram @leslielindsay1 #alwayswithabook for more like this]