For one New England family, their world is about to turn into a nightmare. At first blush, A HEAD FULL OF GHOSTS (June 2, 2015) appears to be a chilling psychological drama, but emerges a modern horror after a descent into madness. But just who is among the mentally unstable? Playing fast and loose with the supernatural, religion, and psychological storytelling, this dark, gothic narrative will surly capture the imaginations of many this hallowed month. 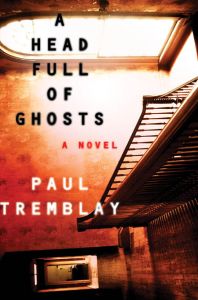 I’m thrilled to have Paul with us today.

Leslie Lindsay: Thanks for popping by, Paul. I read A HEAD FULL OF GHOSTS in about two days…I got an early inkling that things weren’t quite right and wanted to get to the bottom of it. Was that your intention all along—a sort of horror-mystery? What inspired the story?

Paul Tremblay: No problem. Thanks for letting me clutter up your online space.

Back in February of 2013 I was doing research for a different novel and I stumbled across some very cool essays on the movie The Exorcist, and then I thought, “Gee (that’s the PG version of my thoughts), there has been zombie, vampire, and werewolf literary treatments recently but there have been many updates or new takes on the possession story.” So I started thinking about how I would write a possession story, and decided almost instantly that it would be a postmodern, secular (or skeptical) take on exorcisms. I knew that I couldn’t avoid Blatty’s The Exorcist so I decided to address it within the story and use it to my advantage; let the reader know that yeah, I know you’ve seen some of these images and tropes before but they still scare you and it won’t mean you’ll know what’s coming next. It was a fun way to build ambiguity, the multiple layers of Merry as the ultimate unreliable narrator, and to keep the reader off balance by continually questioning what’s real, what isn’t. In some ways the book is very much a commentary on horror; both a love letter to great horror stories and what they can accomplish, and a critique of the nastier politics of some horror stories. But, ultimately, I hope readers’ lasting memories of the book center around Merry and Marjorie, their relationship and the heartbreak and horror of what happened to them and their family.

L.L.: Full disclosure: I love old houses, New England, and…well, ghosts. But this isn’t exactly a ghost story—or, is it?

Paul Tremblay: I’ve lived in New England my whole life. So yeah, I love it too. The house in my novel is a combination of my sister’s house (thanks, sis!) and the house in which I grew up. The author pic for the book was taken in my sister’s stairwell.

I wouldn’t dream of giving my two-bit opinion on what actually happened.

L.L.: What part does the house play in the sense of it being a character in itself? You have a very cool passage in A HEAD FULL OF GHOSTS in which you talk about creepy homes pulled from the pages of fiction—Hill House(Shirley Jackson) for one, as well as the summer mansion from Charlotte Perkins Gilman’s THE YELLOW WALLPAPER. Can you speak to that, please?

Paul Tremblay: Within the Gothic tradition the house is most definitely a character, one that actively affects the story and plot. The physical house of A HEAD FULL OF GHOSTS at a first glance isn’t all that remarkable, but for the sunroom (where the confessionals are filmed, and maybe one of the most disturbing scenes in the first part of the book happens) and the staircase, of course. But the house itself is a reflection of the deteriorating family that lives inside it, and how it’s invaded by outside forces (TV, media, religion, and yes, perhaps a spirit). It is itself a reflection of the history of horror fiction; the yellow wallpaper in the sunroom itself for example. And, there’s the mini-house in Merry’s room, her cardboard house, a reflection or stand-in for her the actual house, or the mountain cabin in the ‘growing things’ story Marjorie tells Merry.

L.L.: I can’t say I’ve ever read a book in which television crews canvas the house the characters reside, a sort of modern-day twist on reality TV meets fiction. It’s a fascinating structure! Can you tell us more about how and why you decided to structure the book that way?

Paul Tremblay: Part of the decision was motivated by wanting to portray as realistically as possible what would happen to a suburban family considering an exorcism. There is no way something like that wouldn’t find its way into the news cycle somehow. Adding the reality TV show to the mix felt like the perfect way to put the exorcism story under yet another lens, another viewpoint, and all the viewpoints muddies the waters of the story, hopefully adding to the feeling of ambiguity/dread. Was what happened with Marjorie real? Was it staged for the reality TV show? How much has Merry’s memories been altered/affected/compromised by not only being on the show, but by her countless viewings of the show later when she was an adult?

L.L.: I see your author photo on the back jacket and it appears as if you live in a vintage home yourself…is it haunted? Do you have any personal experience with haunted houses?

Paul Tremblay: Nah, no experiences with haunted houses. I don’t believe in ghosts and I’m very much a skeptic. That said, I’m a card-carrying scared-y cat and I still run up dark basement stairs and get spooked very easily. It’d be cool to visit/stay in a supposedly haunted house, I think, as long as I wasn’t staying there alone. Heh.

L.L.: What is obsessing you now and why?

Paul Tremblay: The bowl of peanut M&M’s I just devoured. Seriously, why did I eat all those? I’ll be shortly obsessed with the edits for my next novel which are going to land like an asteroid at my feet any day now.

L.L.: Thanks so much for being with us. Happy editing and happy storytelling! 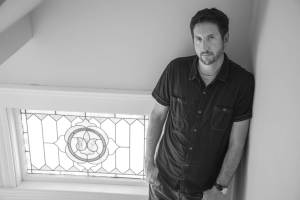 Bio: Paul Tremblay is the author of the novel A Head Full of Ghosts. His other novels include The Little Sleep, No Sleep till Wonderland, Swallowing a Donkey’s Eye, Floating Boy and the Girl Who Couldn’t Fly (co-written with Stephen Graham Jones), and coming next summer Disappearance at Devil’s Rock. His fiction and essays have appeared in The Los Angeles Times and numerous Year’s Best anthologies. He is the author of the short speculative fiction collections In the Mean Time and was also the co-editor the Creatures anthology (with John Langan). Paul is currently on the board of directors for the Shirley Jackson Awards. He is tall and has no uvula.

“A HEAD FULL OF GHOSTS, by Paul Tremblay: Scared the living hell out of me and I’m pretty hard to scare.”

[Cover and author image courtsey of Paul Tremblay. Image of brick home from Roadtrippers, retrieved 9.28.15 and is the actual filming location of the movie THE EXORCIST, located in St. Louis, MO. This is an actual, private residence. This listing is for informational/entertainment purposes only.}

Stand tall. Be bright. Turn toward the sun ☀️. You’re worth it.
#flashbackfriday and an #excerpt of my #memoir in #submission. This is after my mother’s two psychotic breaks in one summer, a slew of vile and disheartening behavior that may or may not have been related to her mental illness; maybe just ‘her.’ Over 30 years later, I have compassion and sympathy for the woman she was, but there’s a vein of unease that courses throughout: how could she have done this to her family, her children? These images are haunting and haunted. She is the house. The shell, the flimsy facade and yet…and yet…I let her in. I dwell on her and allow her to dwell within. And her flaws, they suture and reinforce me.
So yeah…this. I’ve been feeling a bit fried, overwhelmed lately. Like, smaller than ever bandwidth. Why? Four people underfoot 24/7 (plus a basset hound), home renovations and decision fatigue, #travel, an #audiobook release, a #manuscript on #submission, #essays and #articles to #write, furniture to refinish…plus, like…normal living. But! Yesterday, I was at my desk and there were IDEAS! 💡Thoughts. A pen between my fingers. 📝It felt…GOOD! My mojo isn’t back, but I was reminded—briefly—that I do have ideas, I AM creative.
I’ve decided I have a thing for windows. It’s always been there, brewing under the surface, but never really paid it much mind til we got new windows on our house (not my windows here). I think they are a bit magical—looking in or looking out? Light or dark? Conceal or reveal? Do you see more when you look out of a window or when peering inside? Are they the eyes of a building? The soul? They tell a story—but a thinly veiled, often transparent one that shifts with out own perspective and experiences.
📚You guys! I’m so honored to be in conversation with the lovely and talented @therealjoycemaynard about her sweeping tale of #love, #loss, #forgiveness, #family, and more. Things are sometimes messy in COUNT THE WAYS @williammorrowbooks and that’s precisely why I love it. It’s flawed, urgent, authentic, and hits in nearly every emotion.
We hiked a thing. And it was cool.
Loading Comments...