It’s every parent’s worst nightmare: in a blink of an eye, their child goes missing. Gone. Without a trace. What could have happened? How could a parent have been so careless as to misplace her child?

What unspools in a frantic search for missing 8-year old Ben, Rachel Jenner loses herself, casts blame on others, has the reader doubting just what is real. To make matters worse, the public turns on this distraught mother following a single,   momentary mistake.  [What She Knew is the US edition of Burnt Paper Sky, published Dec 1 2015.]

WHAT SHE KNEW is an amazing debut by a highly talented writer, an emotional and enthralling tautly-paced and plotted ride to its chilling conclusion.

I’m so honored to have Gilly Macmillan with us to chat about her psychological thriller debut.

Leslie Lindsay: Gilly, thanks for taking the time to pop over the blog couch with us today. I read WHAT SHE KNEW in a breathless two days. I really wanted to know what happened that fateful afternoon in which your character, Rachel Jenner, lets her 8-year old son run ahead on their walk in the woods. Was this your intention when you set out to write WHAT SHE KNEW? What ultimately inspired you?

Gilly Macmillan: Thank you very much for inviting me Leslie!  I’m so pleased that you enjoyed the book.  When I set out to write WHAT SHE KNEW my overall goal was to write a page-turner, because I really love to read them myself.  However, I was also very keen to try to make it a powerful and personal and relevant story also, so WHAT SHE KNEW is my attempt to bring all of those things together in one novel.

L.L.: I understand, like Rachel, you are also a photographer and mother. Can you share a bit about balancing your desire to write, as well as also carry on with your other work?

Gilly Macmillan:  Well I must admit that having written the bulk of the first draft of WHAT SHE KNEW in my spare time, with no clue as to whether it would be published, as soon as I got an agent I decided I should probably prioritize writing, as I needed to do a lot of work to get the book finished to a good enough standard for submission to publishers.  I was very aware that this was probably my one shot at getting a novel into print.  Once I’d made that decision, it was soon apparent that producing a finished novel is such an all-consuming activity (even when I’m not at the computer typing, I’m thinking about the book all the time), that it’s as much as I can manage to keep my household running and get my kids fed and out of the door to school on time!  Juggling everything can certainly feel like a challenge at times.  However, I do feel that I’m very lucky to be able to work at home, and to enjoy the flexibility of fitting work around my family when I need to, and I make sure I pack my cameras whenever we get a chance to go away for a break, so the photography is not forgotten.

L.L.: I’m amazed at the amount of research you did to make WHAT SHE KNEW such a compelling—and honest—exploration of a child gone missing. Kudos!  Still, it’s an emotionally visceral read. Can you to speak to that, please?

Gilly Macmillan: Thanks Leslie!  I love to research, partly because I’m naturally very curious but also because I think that it can lend an element of truthfulness to a novel, in as much as that can be achieved in fiction.  Having said that, I should admit that I wrote the first draft of WHAT SHE KNEW without doing any research at all.  I wrote it entirely from Rachel’s point of view, and just tried to imagine myself into her situation and record her journey and her feelings, however raw or challenging, as honestly as I could.  It was when I came to do the second draft that I began to look into the more concrete detail of the story, researching child abduction and speaking to retired police officers to make sure the procedural element was correct.  As I redrafted I built my research into the story, and introduced the detective character to act as a foil to Rachel’s narrative.  The difficulty at that point was to be careful not to lose the emotion of Rachel’s narrative so I’m delighted (and relieved!) to hear that you feel that both elements are there in the book.  I wanted very much to incorporate emotional truthfulness as well as factual truthfulness in the novel.

L.L.: Including social media into the novel is just brilliant! It seems like we spend so much time in front of our screens that we forget to look at the world around us. Is that what prompted your interest in adding social media to WHAT SHE KNEW? Did you have other motivations or inspiration?

Gilly Macmillan: Well, the irony is that until WHAT SHE KNEW was accepted for publication I wasn’t a user of social media at all!  Now I can definitely spend hours online if I’m not strict with myself, but at the time of writing the book it was my research into child abduction cases that led me to understand that so much of what people experience when they read about these cases comes through traditional media first of all, but then gets appropriated by social media, where it takes on a life of its own.  It’s can be a circular, self-generating thing too, as very often traditional media then reports on social media reaction, which stokes up online reaction further.  I watched one particular real-life case here in the UK unfold via social media as it was happening, and I was amazed at how personal people’s responses were and how emotionally close some of them seemed to feel (in both sympathetic and very unsympathetic and judgmental ways) to something that, while truly dreadful, was in reality removed from their own lives.  It was then that I felt that I should treat social media almost as a character in its own right in the novel, partly so that readers could experience my fictional case in the same way that they might experience a real life case, but also because I wanted to explore how the influence of social media can swell, and as this happens in WHAT SHE KNEW it affects the characters and the case profoundly.

[Click here to read an excerpt of WHAT SHE KNEW via Gilly’s FB page.]

L.L.: I kept wondering, like the title, what does she know? It seems there are many different ways the novel could have ended, how on earth did you decide on this ending? [without giving too much away, of course!]

Gilly Macmillan:  I wrote three different endings before the book was published because it was so hard to get it right!  I was always sure of one element of the ending, but as for the rest many conversations were had with my family, my editor and agent along the way to try to work out what would be best.  In the end I hope I’ve created an ending that feels truthful as possible, to the story and the characters. It’s been fascinating to have feedback from readers about the ending, and I’m always interested to hear what people think because it was such a difficult thing to do.

L.L.: I read somewhere that your son is a regular on the cast of CALL THE MIDWIFE. Oh, how I love that show! Can you share a bit about what character your son plays? How does the storytelling of television mirror that of novels?

Gilly Macmillan:  My son Max plays Timothy Turner, the son of Dr Patrick Turner, and he’s just finished filming Season 5 so we’re all getting excited about that being on air in 2016.  Timothy has grown up on screen and we’ve been very privileged to read many of the show’s wonderfully written scripts over the years that Max has been involved, and watch his own storyline develop as well as the characters around him.  I definitely think we can draw comparisons between storytelling in television drama and novels, because it’s the job of both to bring us stories – either fresh ones or old tales – in intelligent, but also absorbing and entertaining ways.  Although they’re different mediums, the ways in which novels and TV drama achieve this are similar: both rely on the absolutely core ingredients of convincing characterization, careful pacing, and strong, believable stories.  When these elements work well together, both mediums can achieve a powerful integrity in their storytelling, and I think viewers and readers respond favorably to that.  It’s certainly something I look for when I watch drama or read a novel.  If a book or a TV show achieve that sort of integrity, it allows you to believe in the world and the characters you’re reading about, or watching, and then you care about what happens to them.  That’s what makes you turn pages in a book or watch every episode in a series.  It’s a challenge for every writer, producer or director.

Gilly Macmillan: I’ve just finished my second book, which is also a psychological thriller.  It has a complex plot and a cast of characters who both thrilled and unnerved me as I was writing. The action takes place over a short time scale and is intense and claustrophobic.   The main 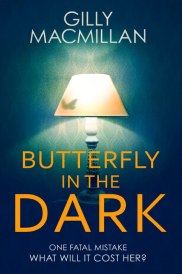 character is Zoe Maisey – a child genius and musical sensation – who, several years earlier, caused the death of three teenagers.  She served her time, and now she’s free.  The story begins with her giving the performance of her life, but by midnight, her mother is dead.  The book is an exploration into the mind of a teenager burdened by brilliance, and it’s also a story about the wrongs in our past not letting go.

L.L.: Is there anything obsessing you now and why?

Gilly Macmillan:  My third book is obsessing me!  All of the time!  I’ve just begun it and for this one I’m returning to Jim Clemo, the detective character from WHAT SHE KNEW.  He’s going to have some involvement in a new case, which is a tough one.  I’m currently working out what’s going to happen to him personally and professionally and I’m developing the characters that will populate the rest of the story.  One in particular already makes my heart race when I write her sections of the story.

Gilly Macmillan: I would like to share how delighted I am to be published in the US!  My family is from the UK but we lived in Northern California for a few years when I was a teenager, and I have very fond memories of that time, so it’s a real privilege, and probably a dream come true, for me to think of WHAT SHE KNEW being available to American readers.

L.L.: Gilly, thanks so much for spending some quality book time with us today, it was a pleasure!

Gilly Macmillan: Thank you so much for hosting me on your blog, and it’s been an absolute pleasure answering your questions.

Gilly Macmillan grew up in Swindon, Wiltshire and lived in California in her late teens. She studied History of Art at Bristol University and the Courtauld Institute of Art in London, and worked at the Burlington Magazine and the Hayward Gallery before starting a family. Since then she’s worked as a part-time lecture in A Level photography. Gilly lives in Bristol with her husband and three children. This is her first novel.