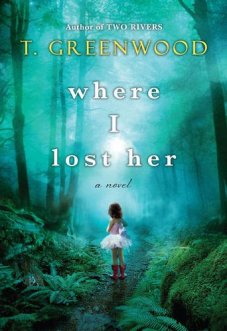 Oh my gosh! WOW. Absolutely spellbinding. I loved every. single. minute of WHERE I LOST HER. Acclaimed author T. Greenwood tackles psychological suspense against the compelling backdrop of motherhood, madness, and infidelity.

You might think it’s a lot to bite off, but I assure you, T. Greenwood is a confident and eloquent storyteller, her prose laced with lyrical nuances, tenderness, and trepidation.

WHERE I LOST HER tows the line between yearning and imbalance, nurturing and obsession, and motherhood and infertility as one woman searches for the truth about a mysterious child.  Will Tess Waters find a lost child, or will she lose her already fragile mind?

Told completely in Tess’s first person POV with flashbacks addressed to her husband, this tandem narrative WHERE I LOST HER is an interior story with psychological thriller undertones written in a poetic, lyrical, and thoughtful manner that alternates with stripped-down narrative, a perfect combination for such an original piece.

Today, I am so honored to have T. Greenwood join us on the blog couch.

Leslie Lindsay: Welcome, Tammy! I am thrilled to have you join us today. I am always so intrigued to learn how a story comes to life for a writer. Was there a moment or event that struck you, indicating: “I have to write this?” What was your inspiration for WHERE I LOST HER?

T. Greenwood: I grew up in Vermont, and I still follow the news there regularly. A couple of years ago, I read an incredible article about someone who found a little girl at the side of the road, but before she could help her, the girl disappeared into the woods. I was so disturbed by that story I couldn’t let it go. Most books start this way for me – with a question that I want answered. I needed to write this book to find out who the girl was and who the woman was who found her. Of course, it is all fiction, but this was the initial spark.

L.L.: Adoption has long been an interest of mine, without any real impetus; I am not adopted, nor am I acquainted with anyone who is. I’m amazed at your ability to bring the experience to life in WHERE I LOST HER. Can you share what kind of research went into your narrative

T. Greenwood: My sister is adopted. She was born in Korea, and came to us when she was six months old. I was seven at the time, and I have very vivid memories of the adoption process. It’s something I haven’t really ever written about before. I also have friends who adopted their son from Guatemala, but prior to his adoption they had a Guatemalan adoption that fell through. It was a crushing experience for them, and they were kind enough and generous enough to share this experience with me. I knew when I began writing about Tess’s obsession with the lost child that there was a reason why it mattered so much to her to find her. As I dug into her past, I discovered that this was what was haunting her. The novel is very much about motherhood, about the longing for a child by whatever means.

L.L.: And the setting! I’ve never been to Vermont, but I could easily transport myself to the camp where Effie and Devin live, smell the musky ferns growing in that vertiginous forest, and the swimming hole where Plum was certain there were fairies. And of course, the place where the girl was missing. I understand the Vermont woods holds a special place in your heart—in fact, this isn’t the first story you’ve set in Gormlaith. Can you share more about that?

T. Greenwood: I have written ten novels, and eight of them are set in or around the fictional Lake Gormlaith. This lake is based on a real body of water in northeastern Vermont

where I grew up. My family still spends a month or two there every summer. Tess actually appears in my first novel, Breathing Water, which is Effie and Devin’s story. It was thrilling to revisit them again after all of these years. This fictional place has become my go-to setting. The characters and setting have developed a life of their own.

L.L.:   There are a lot of things going on in this story—but that’s not exactly a bad thing! I loved the multilayer approach, the complex characters, and thematic elements. What about writing WHERE I LOST HER surprised even you?

T. Greenwood: Everything! I have never written a suspense novel before, and so the entire process was new to me. I never outline my novels, though I have a general sense of the plot, but I found myself writing furiously to find out what happens next. I hope this sense of urgency and surprise is there for the reader as well.

L.L.: There are so many ways this story could have ended. I am sure you toyed with them all! Did you have a clear sense of where you were going when you set out to write, or did the truth sort of evolve as you approached the end?

T. Greenwood: It became clear to me about halfway through the novel that there was only one satisfying way that the story could end. This is typically how my process works. At about the mid-point, the plot and characters convene, and the remainder of the book is then organic and inevitable.

L.L.: And a word on structure: while WHERE I LOST HER is told completely in Tess’s voice, we get a glimpse into her past. In what form did you see those brief interludes? An open letter?  A journal entry? A dream? Something else?

T. Greenwood: This book is, in many ways, about a failing marriage. And in most instances when a marriage is failing, there is no longer any communication between the people involved. I wanted to give Tess an opportunity to communicate to Jake exactly how she felt: about him, about their marriage, about the child they lost. It’s a love letter, I think, a sort of elegy to their relationship.

T. Greenwood: I am revising a novel called The Golden Hour, another suspense novel about a woman who finds out that a man who has been in prison for twenty years because of a crime committed against her may be released based on new DNA evidence. It’s a disaster right now, but I am hoping it all comes together. Soon.

L.L.: What is obsessing you now and why?

T. Greenwood: In terms of writing, I am primarily consumed by this project, but I have another one on hold. But generally speaking, I have been totally obsessed with “Making a Murderer,” the documentary series on Netflix. It plays into the book I am revising, but I am totally riveted by true crime documentaries. I have really, really enjoyed writing in this genre

L.L.: Is there anything I should have asked but forgot?

T. Greenwood: I don’t think so!

L.L.: Tammy, thank you so very much for popping by today. I just adored the book and can’t wait to read more from you!

T. Greenwood: Thanks so much for chatting.

Bio: T. Greenwood is the author of ten novels. She has received grants from the Sherwood Anderson Foundation, the Christopher Isherwood Foundation, the National Endowment for the Arts, and the Maryland State Arts Council. TWO RIVERS was named 2009 Best General Fiction Book at the San Diego Book Awards, and GRACE received the same award for 2012. Five of her novels have been BookSense76/IndieBound picks; THIS GLITTERING WORLD was a January 2011 selection, and GRACE was a selection in April 2012. Her eighth novel, BODIES OF WATER, was a 2014 Lambda Literary Awards Finalist. WHERE I LOST HER will be released on February 23, 2016.

She teaches creative writing for San Diego Writer’s Ink, Grossmont College, and online for The Writer’s Center. She and her husband, Patrick, live in San Diego, CA with their two daughters. She is also an aspiring photographer.

[Special thanks to T. Greenwood. Cover images courtesy of author. Netflix series image “Making of a Murderer” retrieved from Wikipedia on 1.14.16]