It seems Mary Kubica has had a quick rise to prominence. But once you get to know her, you’ll know its not exactly glittery stardust that got her to the top. 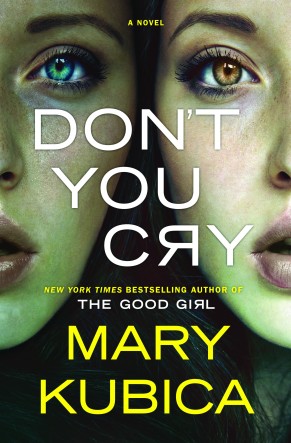 From writing in secret (her words, not mine) when her kids were just preschoolers, to getting a call from an agent two years after the first read of her debut THE GOOD GIRL (see my earlier interviews of Mary in 2014 and 2015), and then feeling as if she can’t possibly maintain her schedule of volunteering at the animal shelter, writing, raising kids, and everything else that goes into her busy life, Kubica returns with an electrifying and terrifying tale of deceit and obsession.

I was reading away and thinking I had it all figured out. Maybe. Possibly. Oh, but wait…maybe not. DON’T YOU CRY (forthcoming, May 17th) is Complex, unpredictable, and masterful.

I’m so thrilled to have Mary pop over for a cup of coffee and chat about her new book and everything in between.

Leslie Lindsay: It’s great to have you back, Mary! I know we talked about DON’T YOU CRY when you were in the very early stages of writing, but at the time, your main concern was that the characters were a bit younger than your other two books. Still, I’m not sure I ever learned what really sparked your interest in this story. Can you share?

Mary Kubica: As with my two earlier novels, that first spark of inspiration is always some unintentional and underdeveloped idea that pops into my mind.  With The Good Girl, it was a kidnapping; with Pretty Baby, it was a vision of a young homeless girl with a baby.  When I began writing Don’t You Cry, I was intrigued by the notion of tracking the simultaneous disappearance of a woman with the appearance of a woman in another town, though I didn’t know who all the characters would be, or how their lives would intersect.  These were details I figured out during the writing process.  But Don’t You Cry came together differently than the rest of my books.  As I was on a tight deadline thanks to a scrapped manuscript and trying hard to make up for lost time, I wrote it in record time for me, finishing a draft in about three months and writing with an urgency I’ve never had before.  I think the storyline itself mimics my own frantic writing during this time.

L.L.: And so the character’s ages…was that a challenge in the end?

Mary Kubica: My second novel, Pretty Baby, has a heavy dose of marital conflict, family strife and the difficulties of motherhood worked in.  I intentionally wanted to take a step back from this and delve into the world of a different generation for Don’t You Cry.  In this novel, the main characters are twenty-three-year-old, Quinn, and eighteen-year-old, Alex, and though Alex is young, he’s mature beyond his age.  Quinn was the one who was more of a challenge for me to write because she’s carefree, sometimes making rash decisions, living in that time of her life when she’s just starting to figure out the realities of adulthood and has few responsibilities in life.  That said, she is a likeable girl and I know there are aspects of her young life I see in my own.  I think readers will easily relate to her struggles of growing up and coming to terms with adulthood.

If you haven’t read Mary Kubica yet, you need to start right this minute, with DON’T YOU CRY. This riveting psychological thriller had me turning the pages at warp-speed and kept me rooting for its heroine, the completely relatable Quinn Collins, who sets out to uncover the truth about her seemingly-perfect female roommate after the roommate mysteriously vanishes. The plot twists and turns more than Single White Female on steroids, and both women characters are crafted with emotional intelligence and extraordinary talent. Mary Kubica is a must-read for me, and she will be for you, too.

L.L.: You have such a way with the city—that is, downtown Chicago—that I don’t have, even though we’re both suburbanites to the same city. I don’t know what “L” stops take me to Cermack or where Farragut Avenue is located. I couldn’t tell you about the coffee shop at Clark and Berwyn, but you can. Is there a lot of research that goes into this, or is it just you and your super-power knowledge of being a Chicagoan?

Mary Kubica: Immediately after college, I rented a studio apartment in Chicago’s Lake View neighborhood and worked at a law firm in the Loop – much like the one Quinn also works in – while finishing up my teaching degree.  I took public transportation to work and school, and so, though I’m a typical suburbanite these days, I have a prior knowledge of how the city works and feels.  That said, my memory isn’t quite what it used to be, and so I also spend a good amount of time scouring the CTA website for information when I write.  Many of the structures I mention – the coffee shop at Clark and Berwyn, for example, or the book store where Esther works – are completely fictional, and so the end result is a combination of prior knowledge, some research and a little imagination.

L.L.: And then we hop-skip to the other side of the lake, to a sleepy little Michigan resort town where we meet Alex Gallo, the young dishwasher who falls under the spell of a mysterious young woman. I felt this place very strongly. The cool November wind, the deserted streets after everyone left at the end of the season, the metaphorical chill. Do you feel as though setting often becomes character?

Mary Kubica: Setting is very important to me, and plays a central role in all of my novels.  I want readers to feel as though they’re there in my books, living beside the characters’ lives.  As a Chicagoan, I spent many summers vacationing on the eastern shores of Lake Michigan in towns like St. Joseph and South Haven, and some of my fondest memories of childhood involve climbing the sand dunes at Warren Dunes State Park (a must if you’ve never been!) and walking along the shores of Lake Michigan.  The Michigan town in Don’t You Cry is a fictional composite of all of these towns, and serves as a contrast to the hustle and bustle of urban Chicago life.

L.L.: There’s an abandoned house that pops up in Michigan. Oh, how they fascinate me! Was there a real-life inspiration for this, or did it just magically appear for you? 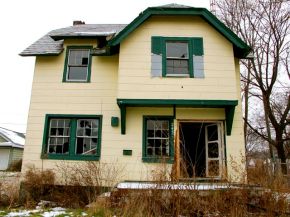 Mary Kubica: This home fascinated me as well!  When I started writing the novel, it was completely fictional, but as soon as I realized the house was going to play a much more significant role, it became my mission to get the look and feel of the home just right.  I did research and found some older, abandoned homes in the towns around mine, and visited them to be sure I got the details right, the way the homes sunk at their bases; the cracked concrete foundations; the vines that snaked around the exterior of the homes, barring any natural light from entering the inside.  I found it captivating to imagine the family that once lived there, and to wonder what happened to them, and why the homes were now abandoned.  There wasn’t any one home in particular that became the inspiration for Genevieve’s home, but rather bits and pieces from an assortment of abandoned homes.

L.L.: Speaking of which, I know you’re not a plotter. Does that help you in the writing process…to create a sense of surprise and urgency on your part? Is it a hindrance? Do you ever discard major portions of your work after you’ve played around with it and have found the ultimate direction?

Mary Kubica: You’re right, I am not a plotter, and try hard not to overthink my novels ahead of time but rather to create the characters and give them free reign to tell their stories to me.  As a writer I have the moments of writer’s block, of course, but by not planning it all out in advance, the novels have what feels to me to be a more natural flow rather than a premediated one.  There are many times the paths the stories take surprise me, and I find this thrilling as an author, though without fail, there are also things I end up revising or deleting because the direction of the book changes throughout the process.

L.L.: There are some dark, grisly scenes in DON’T YOU CRY. And I look at you and think, no…not this sweet gal with two young kids and a cat for every member of the family. But insinuating yourself into the minds of…well, crazy, sinister people is kind of fun. Can you speak to that, please?

Mary Kubica: Well, anyone who has four cats probably has to be a little bit crazy!  Truthfully though, it’s fascinating to me to be able to get into the minds of characters who are far different than me, whether it’s eighteen-year-old Alex with his incompetent and alcoholic father, working overtime to make sure they don’t lose their home, or someone who is dark and sinister and evil.  It’s fun, and suffice to say, my characters’ lives are often far more interesting than my own.  With them, I get to step out of my comfort zone, use a little creative license and imagine what it would be like if I wasn’t the average suburban mom with two kids and a houseful of cats.

Mary Kubica: I’ve just finished a draft of my next novel, which is yet untitled.  This one should release in the summer of 2017.  I’m looking forward to sharing it with you!

L.L.: What are you currently reading?

Mary Kubica: I just finished devouring Kimberly McCreight’s THE OUTLIERS and Megan Abbott’s YOU WILL KNOW ME, which release this spring and summer.  They’re both absolutely fascinating books and ones I would highly recommend.  Up next on my to list is JUNE by Miranda Beverly-Whittemore.  I loved her last book, BITTERSWEET, and cannot wait to give this is a read.

L.L.: What might be obsessing you now and why?

Mary Kubica: My next project is where my obsession lies these days.  As with most of my books, I get completely swallowed up by the characters and their stories, and have trouble quieting them down when I’m not actively writing.  But I’m also obsessing over this season of American Idol, getting ready to launch Don’t You Cry, and counting down the days until summer.  It can’t get here soon enough!

L.L.: Thanks for taking the time to chat with us, Mary! Such a pleasure, as always.

Mary Kubica: Thank you so much for having me, Leslie.  It’s always wonderful to visit. 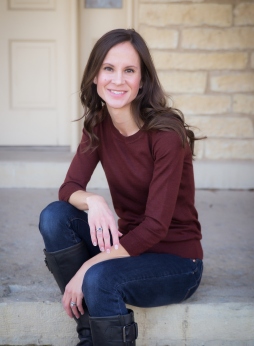 Bio: Mary Kubica is the New York Times bestselling author of THE GOOD GIRL (2014) and PRETTY BABY (2015).  She holds a Bachelor of Arts degree from Miami University in Oxford, Ohio, and lives outside of Chicago with her husband and two children.  DON’T YOU CRY is her third novel.Follow Mary on:

[Cover and author images courtesy of  E. Flounders at MIRA. Abandoned house image retrieved from on 2.29.16 and has no direct link to DON’T YOU CRY or Mary Kubica]