Three generations of one family–a grandmother, daughter, and granddaughter–escape to a beautiful coastal town in Maine to find healing in the wake of heartbreaking loss in bestselling author, Holly Chamberlin’s twentieth (!?!) novel, HOME FOR THE SUMMER. 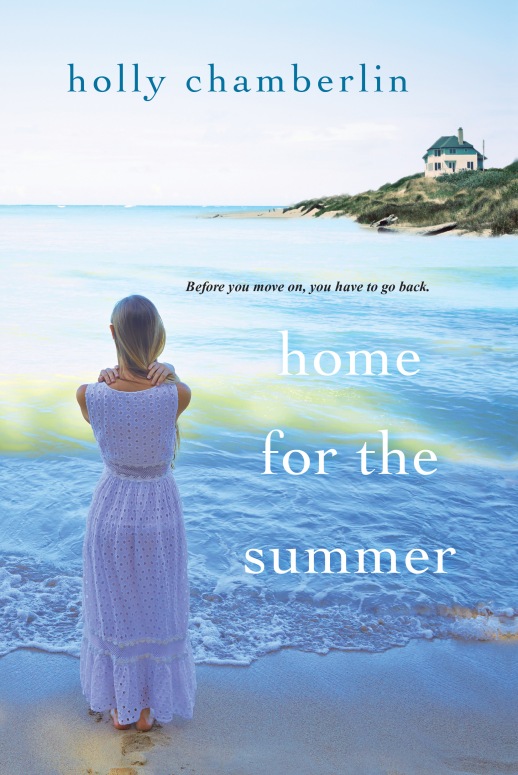 When both her husband (Aaron) and youngest daughter (Ariel) die in a tragic accident on vacation, Frieda Braithwaite is left a bereft mother and widow. There’s survivor guilt and financial and emotional struggles; fearing she’ll lose her remaining daughter, Frieda and Bella leave their home for Maine, where Ruby, Frieda’s mother has always lived in an old farmhouse.

With the help of new friends and old—plus, the healing balm of family, Frieda and Bella mend their broken hearts. HOME FOR THE SUMMER is a sweet, tender read set in a tranquil coastal town that will carry along with those who yearn for simpler times and readers who resonate with the works of Karen White, Diane Chamberlain, Elin Hilderbrand, and Nicholas Sparks.

Come along and join me as I chat with Holly about her newest book, HOME FOR THE SUMMER (Kensington, June 2017).

Leslie Lindsay: Holly, welcome! ‘Coming home’ seems to be a major theme for you and your books. As does summer and the beach. In HOME FOR THE SUMMER, we’re thrust into the world of a grieving wife and mother. Can you share your inspiration for this one?

Holly Chamberlin: Hi, Leslie. Many thanks for having me! Coming home . . . The older I get the more I’m drawn to contemplate my past before late adolescence and early adulthood changed things so radically as they do for all of us. Exploration of my early past is my way of figuratively coming home and yes, the theme in all its variety fascinates me. In this book Ruby, the matriarch of the family, literally summons her daughter and granddaughter to spend the summer with 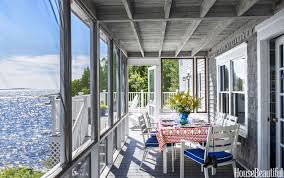 her so that together, all three women hopefully can heal. Many of my novels take place during the summer months because ideally summer provides a bit of a respite from the daily grind. Even if a person doesn’t get much of an actual vacation, summer brings with it a state of mind in which a person can dream of positive change and a fresh start and that’s conducive to telling the sort of stories I tell.

L.L.:  I’ve been to Maine and loved it. There’s something old-school and simple about it, and yet a bit progressive. I’m always curious about the towns where the books I read are set. I looked up Yorktide, but came up empty-handed. Is it a purely fictional town, or a composite of several? Is it related to York Harbor, Maine?  And why Maine?

Holly Chamberlin: Yup, Yorktide is fictional and a bit of a mash-up of Ogunquit, Cape Neddick, Kennebunk, and yes, York Harbor. At times, I mention actual stores and restaurants but I’ve also created a variety of fictional places. Wainscoting and 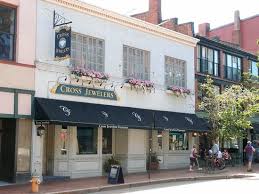 Windowseats is a creation; Cross Jewelers is not – and my credit card can attest to that. My husband, Stephen, and I have lived in Maine since 2003 so we’re very much still ‘from away’ which is what Mainers say about people who arrived recently, i.e. less than 30 years ago, and we love it here. And you’re right – there is something old-school and simple about Maine; people here seem to possess a fierce sense of fairness and an impressive work ethic. In addition, the state attracts large numbers of artists, writers, and musicians which makes for a lively environment.

L.L.: I love that Bella works at Wainscoting & Windowseats, though she’s a bit cranky about it. She doesn’t care about candlesticks or drapes…but I do! Can you talk about the character of Bella a little bit? And are you as taken with home décor as I?

Holly Chamberlin: I think Bella can be described as a good egg. She’s fundamentally honest and loving. Her sister’s tragic death has rattled her badly to the point where she’s become a shadow of her true self. By the story’s end Bella has definitely changed from the girl she was before Ariel’s and her father’s deaths, but for the better. She’s mature in ways that she probably wouldn’t yet be if her father and sister were still alive but she hasn’t lost her native optimism and an appreciation for the beauty of the natural world around her.

On to home décor. You’ve caught me at a time when we’re preparing to downsize rather radically so I’ve been going through my credenzas and closets selecting items for Goodwill. Let’s just say that I’ve amassed quite the collection of table linens, vases, candlesticks, serving platters, milk glass objects . . . The list goes on. When we designed this house, the theme was ‘faded elegance’ and boy, did we achieve that look! In our next home, we’re going for a brighter, lighter, and cleaner look though we’ll incorporate some of our current furniture and as much of the art work as possible.

L.L. I have to admit, every time Ruby was in the kitchen, my mouth watered. I was thinking about lobster rolls, fresh corn on the cob, blueberries…and all of the other decadent things she whipped up. What are some of your favorite foods from HOME FOR THE SUMMER and what role would you say food had in the novel?

Holly Chamberlin: In pretty much all of my recent novels gathering for meals has a fairly big role. I mean, it’s traditionally around the family table that feelings are expressed (sometimes to disastrous effect!) and information shared (ditto!). The person providing the meal is offering a gift and to partake of that meal is a way of thanking the provider. Gathering for family dinners isn’t as typical as it used to be 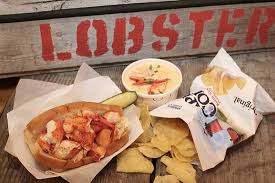 for all sorts of reasons, but in my books, I force the issue. As for favorite foods from the book, I’d have to say the fish! I love a big red lobster fresh from the steamer – especially on a wharf by the harbor – but all the fish is amazing here. Diver scallops, fresh cod, swordfish, oysters! The fish markets on the waterfront are amazing. It’s one of the best things about living here by the sea. And we do have the most amazing wild blueberries, which are quite different from the blueberries you find in grocery stores – smaller and sweeter.

L.L.: Frieda is dealing with a huge amount of grief and change with the death of her husband and daughter (not a spoiler—I promise!). What do you think happens with her in the end?

Holly Chamberlin: Without revealing the specifics of the ending for those of your readers who haven’t read HOME FOR THE SUMMER, I foresee a very positive future for Frieda. She comes to realize that she’s a lot stronger than she thought she was. The very fact that she chooses to engage with her estranged father is an indication that she’s not one to fold up and die. And the fact that she learns to find a balance between caring for her daughter and for herself, between respecting the needs of others as well as her own needs, bodes well for the future. Not all of the characters in my books face as bright a future.

L.L.: Now that summer is a little more than half over (sniff, sniff) how are you doing on you summer ‘bucket list?’

Holly Chamberlin: Summer would be a washout if I didn’t get to enjoy a big bucket of steamers at Chauncey Creek, our favorite lobster dock; hear a local band on the deck at Portland Lobster Company; and spend an evening by the harbor at David’s in Kennebunkport eating truffle potato chips and oysters. But what I love more 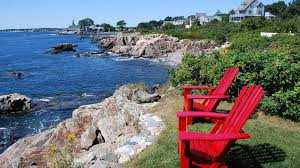 than anything is a long walk on the beach in the late afternoon light, collecting interesting stones and beach glass.

L.L.: What’s obsessing you now and why? For me, it’s what color should I paint my kitchen cabinets. Really. I will wake up in the middle of the night thinking about this.

Holly Chamberlin: My current and longtime obsession is jewelry. I’m a collector and enjoy learning about new designers and their techniques and reading about jewelry in different periods of history. At the moment, I am lusting after a grey, rose-cut diamond ring. Several contemporary designers are creating beautiful pieces using ‘imperfect’ stones in this lovely old-fashioned cut. The truth is that I spend way too much time on jewelry websites, blogs, and Instagram accounts. Wait. It’s not too much time! I love it!

L.L.: Holly, it was a pleasure! Thank you for popping over. Is there anything else you’d like to add that I may have forgotten?

Holly Chamberlin: I’d just like to say that, maybe more than a lot of my other characters, I really came to love and respect Frieda, Bella and Ruby as I got to know them. They’re vulnerable but such a strong family, and strong as individuals, too, in the end. I hope my readers agree!

For more information about HOME FOR THE SUMMER, to purchase your own copy, or to connect with Holly on social media, please visit: 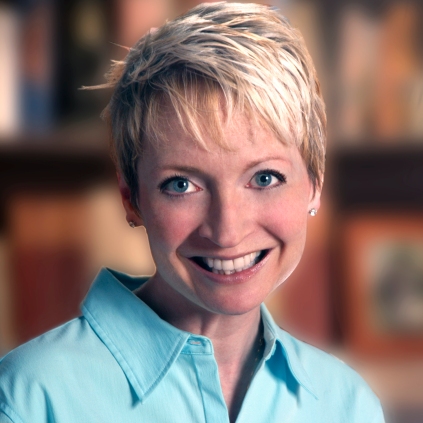 ABOUT THE AUTHOR: Holly Chamberlin was born and raised in New York City. After earning a Masters degree in English Literature from New York University and working as an editor in the publishing industry for ten years, she moved to Boston, married and became a freelance editor and writer. She and her husband now live in downtown Portland, Maine, in a restored mid-nineteenth century brick townhouse with Betty, the most athletic, beautiful and intelligent cat in the world. Readers can visit her website at:  www.hollychamberlin.com

[Cover and author image courtesy of Kensington Books and used with permission. Summer porch retrieved from House Beautiful, Cross Jewelers from Google+, images of seafood/lobsters/Adirondack chairs from TripAdvisor, all retrieved on 7.6.17]