Spunky and bright Abigail Lawless, uncovers evidence that a recent suicide may have been murder in 1816 Dublin.

It’s October and that officially means all of us who love a tale of the gloomy and grisly can be at home reading. Even better if rain is drumming down your windows and a you live in a derelict country manor.

A young nursemaid has concealed a pregnancy and then murdered her newborn in the home a prominent family in a radical Christian sect known as the Brethren. Rumors swirl about the identity of the child’s father, but before an inquest can be made, the maid is found dead of an apparent suicide.

And so it begins, a lovely relationship between Abby Lawless and her father, the town’s coroner. Abby is a spunky, slightly quirky young woman with an adventuresome spirit; I was taken with her almost immediately. Plus, she loves science. 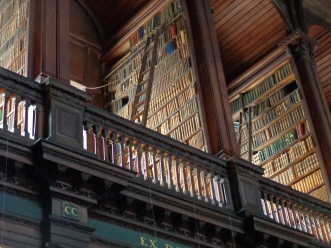 But it’s 1816 in Dublin and young women just don’t run around with their academic fathers who teach at Trinity College dissecting the dead. At one point in the story, Abby says [and I’m paraphrasing]:

“Well, if I were a man and had this interest, it would be considered a fascination but I’m a woman and so it’s a macabre fixation.”

There are a few twists and turns in THE CORONER’S DAUGHTER, some good action scenes, and a little romantic relief as well. Hughes does a considerable job of ‘laying the ground,’ and setting a compelling scene of brooding Irish landscape. His research is evident, too and accurately displays a historical tale of murder, suicide, and forensic science.

I am honored to welcome Andrew Hughes to the blog couch.

“For my eighteenth birthday, Father promised me the hand of a handsome young man, which he duly delivered mounted in a glass bell-jar.”

What instigated the beginning of this tale for you and what advice would you give to writers looking for a really fantastic ‘hook?’

Andrew Hughes: Thanks, Leslie. One of the challenges I had early on was to capture Abigail’s voice, her wit and her appreciation of the macabre, particularly as the story was told in the first person. I was imagining a Jane Austen type heroine loose in Regency Dublin, and was thinking about some of the tropes in period fiction when the line popped into my head. I liked it as well because it hints at the relationship she has with her father, his humor and his indulgence of her more morbid interests.

As for advice for writers, I’d say just concentrate on voice and character and don’t get bogged down. Get the plot started as quickly as possible and don’t look back.

L.L.: Andrew, you do a wonderful job depicting 1816 Dublin. The year is known as, “the year without summer.” Can you tell us a little about your research?

Andrew Hughes: My first book was a social history of Dublin called LIVES LESS ORDINARY, which looked at all the people who lived in one of the city’s Georgian squares. I didn’t realize it at the time, but all that research was giving me a terrific

setting for historical fiction and a ready-made cast of characters.

I read about “the year without a summer” a while ago. A dust cloud from the eruption of Tambora in Indonesia settled over Western Europe, bringing frost to mid-July, crop failures and hardship. The sun turned blood-red, and black dots scattered about its disk became clear to the naked eye.

At the same time in Dublin there was a growing conflict between students of the Enlightenment and a burgeoning evangelical movement whose proselytizing would become known as the Second Reformation. For me, the eerie weather, religious fervor and rationalist zeal created a perfect tinder-box atmosphere for historical crime fiction.

In terms of specific research, I found newspaper transcripts of 19th Century inquests to be a great source. Each inquest was its own mini-drama – the description of the victim, particulars of the crime, the testimony of witnesses, often people from the poorest backgrounds whose voices would otherwise have gone unrecorded.

L.L.: I’ve always loved science, but forensics and forensic psychology really fascinate. In fact, I looked up some of the books you mention in the novel, Male’s EPITOME OF FORENSICS, for example. I didn’t find it. I imagine it’s likely in a special collection somewhere? Trinity College, perhaps?

Andrew Hughes: I used a slightly abridged title! In full it’s An Epitome of Juridical or Forensic Medicine; for the use of medical men, coroners, and barristers, and it’s available online here.

It was published in 1816, which was perfectly timed for me. Male was a surgeon who had grown increasingly frustrated at the inability of coroners to identify cases of murder because of a lack of medical knowledge. He wrote a clear guide outlining the procedures for inspecting a body, the marks associated with violent deaths, the scientific tests to establish poisons, and so on. It became my textbook for Abigail and her forensic adventures.

L.L.: And Abigail Lawless! What a fun, quirky, adventuresome young woman. How did you dream up her character? Is she based off anyone you know?

Andrew Hughes: For me, Abigail was a reaction to my first novel, THE CONVICTIONS OF JOHN DELAHUNT, which was based on a true-life murderer and police informer in 1840s Dublin. That was a first-person narrative told from the murderer’s point of view, and while at times it was fun to inhabit his amoral head, I knew that for my next book I wanted the main character to be the hero. I also wanted to write about a young woman rather than a man, and since she would need plausible access to cases of murder and their investigations, the idea of the coroner’s daughter came to be.

I didn’t base her on anyone in particular. I imagined a modern Irish girl having to make her way in that society, the constraints and prejudices she would have to face. She’s headstrong and rebellious, but also a loving daughter, a kind friend. One of the reviewers over here [in Ireland] called her “great company”, which I liked.

L.L.: Also, I loved the derelict manor of Kilbride. There’s something brooding and intriguing about the obscure, bringing a sense of doom and tension to writing. Does the place exist and if not, what was your inspiration?

Andrew Hughes: Yes, Manor Kilbride is a village about an hour south of Dublin. I remember passing the church there once, St John’s, and being struck by the setting.
It’s a simple chapel perched on a hillside with listing headstones and dark woods surrounding – the perfect gothic location. Mr Darby’s ruined vicarage I just made up myself. I found out later that the village and church were used as sets in the Anne Hathaway film Becoming Jane. Their location scout obviously felt the same way I did.

L.L.: Can you talk a little about the Christian sect, the Brethren, mentioned in THE CORONER’S DAUGHTER? Was this purely fictional, or based in history?

Andrew Hughes: That came out of my LIVES LESS ORDINARY book. The Plymouth Brethren were an evangelical movement that first began meeting in Fitzwilliam Square in the 1820s. Their gatherings in England took place in Plymouth so that’s where they got the name. In a general sense, they were an inspiration for the sect in 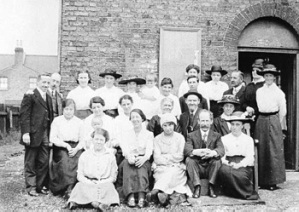 THE CORONER’S DAUGHTER, and their charismatic leader was also called Mr Darby. But in Ireland in the early 19th Century there was a growing evangelical reaction to revolutionary politics and the campaign for Catholic emancipation, not just confined to the Plymouth Brethren. Of course, any such conservative movement would find a natural antagonist in the curious, inconvenient, and intuitive Abigail.

L.L.: What’s keeping you up at night? It doesn’t have to be literary (and hopefully it’s not grave robbers)!

Andrew Hughes: Apart from worrying about the daily news, I’ve been catching up on a few true-crime series lately. I got through Making a Murderer and The Keepers on Netflix with unseemly haste. Also listened to the latest Serial podcast, S-Town. That was an excellent portrait of an intriguing man, but in the end I got tired of the hooks and cliffhangers that were never quite resolved. I’ve been writing a lot these past few months and have to catch up on my TBR pile, but I’ve started reading THE GINGER MAN again after the death of J.P. Donleavy.

L.L.: Andrew, it was a true joy. Thank you for chatting with us about THE CORONER’S DAUGHTER. Is there anything I forgot to ask, but should have?

Andrew Hughes: I’ve just finished a new novel, more Irish historical fiction, this time based on a real-life 18th Century character: Lady Betty, the merciless hangwoman of Roscommon! The ink is barely dry on that one, so I’ve not much more news, but keep an eye out for it in 2018.

For more information, to connect with Andrew Hughes via social media, or to purchase a copy of THE CORONER’S DAUGHTER, please see:

ABOUT THE AUTHOR: Andrew Hughes was born in Ireland and educated at Trinity College, Dublin. It was while researching his acclaimed social history of Fitzwilliam Square—Lives Less Ordinary: Dublin’s Fitzwilliam Square, 1798-1922—that he first came across the true story of John Delahunt that inspired his debut novel, The Convictions of John Delahunt. Andrew lives in Dublin. 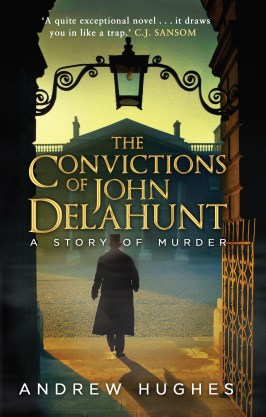 You can connect with me, Leslie Lindsay, via these social media venues:

[Cover and author image courtesy of Pegasus Books and used with permission. Image of ‘the year without summer’ retrieved from The Paris Review, image of St. John’s Church/Kilbride retrieved from, image of The Plymouth Brethren retrieved from Wikipedia, all on 9.28.17. Trinity College library from L.Lindsay’s personal archives]