From the bestselling author of HOTEL ON THE CORNER OF BITTER AND SWEET comes a powerful novel of inspired by a true story of a young boy raffled off at a little known World’s Fair (AYP/Seattle), which left me hopeful and nostalgic, and definitely a fan of Jamie Ford.

I so enjoyed LOVE AND OTHER CONSOLATION PRIZES, which captivated me from the first page and sent me into a the lovely dual time periods of the early 20th century (1902-1911) and the mid-twentieth century (1962) as we follow Ernest Young from underprivileged China, then stripped from his mother to board a cramped ship en route the U.S. The first few chapters are particularly harrowing and are a bit reminiscent of the African slave trade; it will pull at your heart strings.

Ernest (whose name was changed from Kun-ai), is placed in an orphanage in Seattle, attends a fancy boarding school as a charity student, but he’s not happy. An opportunity arises for more ‘adventure’ and Ernest is raffled off at the AYP (Alaska-Yukon-Pacific) World’s Fair. He’s 12 years old. 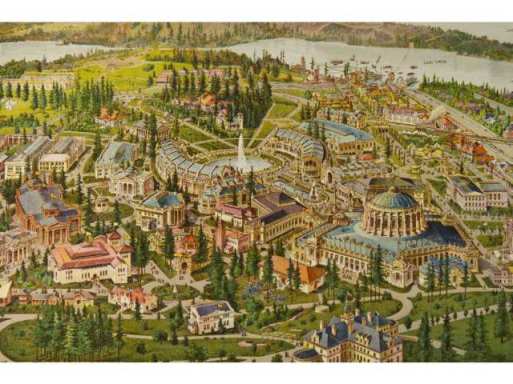 But who has the winning raffle ticket is what will blow your mind. Ernest is not sent to a loving family who desperately want a child; his life is on the seedier sides of the track, so to speak. I don’t want to say too much for fear of giving it away, but we are met with a cast of very colorful characters, issues involving race (Ernest is half-Chinese, half-Caucasian), of not really fitting into either culture, and also love and issues of morality.

In 1962, we meet Ernest’s grown daughters and their quest to learn the truth of their dad’s past. One daughter is an investigative journalist and she handles this story with aplomb and sensitivity.

Jamie Ford is such a gifted writer and was completely thrust into his world, the scenery is amazing, his use of historical facts truly organic and relevant; I found LOVE AND OTHER CONSOLATION PRIZES a glimpse into not just the heart of the characters, but also the author. Absolutely Stunning!

Today, I am so, so honored to welcome Jamie Ford to the blog. Please join us in conversation.

Leslie Lindsay: Jamie, wow. The second chapter—the imagery, the desperation, the harrowing tale you set out to describe blew me away. I know stories have to capture not just the reader, but the writer as well. It’s evident that your fascination with Chinese-American history inspired LOVE AND OTHER CONSOLATION PRIZES, but what more can you tell us about the impetus of this tale?

Jamie Ford: Um, yeah, there’s a dark moment early in the book. (Sorry about that). So dark that a friend bought the book, began reading, and then texted me: THERE’S DEAD BABY ON PAGE 8. THIS BETTER GET HAPPIER IN A HURRY, FORD. So, there’s that.

And really, the impetus for that scene is centered around the Chinese Exclusion Act of 1882, which limited migration of Chinese workers to the US safely, but opened a black market of human trafficking, indentured servitude, and misery. Tragically, people risked life and limb to get here and many died in the process. Not unlike many coming to this country today.

L.L.: LOVE AND OTHER CONSOLATION PRIZES struck a chord with me in several ways, but one is that I have a twelve year old daughter myself. I couldn’t imagine sending (giving?) her away! But this is 2017 and the world is a different place. Or is it? Also, my own grandfather was once ‘sold.’ He was the second boy in a family of four. He was small and scrappy. The family traveled and didn’t have much money. They exchanged money for their son. The man took him to a barber shop for a haircut and learned he had lice. My grandfather wasn’t wanted and returned to his family. His parents were angry about returning the money. I share this because Ernest Young endured a similar fate. The buying and selling of children is ghastly. Also, another point is the truth behind your fiction is that in ‘real life,’ the child raffled off at the 1909 fair was an infant, not a 12 year old. Can you talk about that, please?

Jamie Ford: It’s true that a boy was donated by the Washington Children’s Receiving home and raffled off at the 1909 World’s Fair in Seattle. His name was Ernest. And in reality, he was an infant. But, as an author, I wanted a point-of-view character who could see and remember the fair, so I made him an older child.

The genesis of that again came from a contemporaneous article in a Washington newspaper in which a woman wrote in asking for a 12-year-old boy—basically she said, “I want the ugliest boy you have. I know hard work will bring out the best in such a lad.” And a gentleman from the receiving home, the same man depicted in the book, wrote back saying he had a boy she could have. The casual nature of adoption and the implication of servitude drove much of the narrative in my novel.

“Irresistibly magnificent . . . How does a novel genius top himself? Jamie Ford’s newest takes an extraordinary moment in history, where vice lives alongside innocence, and transforms it into a dazzling, hold-your-breath story about the families we make and the ones we are thrust into, about who we are, and who we dreamed we could be.”—Caroline Leavitt, author of Pictures of You and Cruel Beautiful World

L.L.:  Much of LOVE AND OTHER CONSOLATION PRIZES is about race and culture and mixed race individuals not really feeling at home in any particular place. This is true of many biracial individuals, yourself included. Can you shed a little more light on that?

Jamie Ford: It’s always a challenge when you have each foot planted into a different culture. I was often confused growing up. I never felt Chinese enough, because I didn’t speak Cantonese like my dad. And I never felt white enough, because…we ate weird things like chicken feet and dried cuttlefish. So, while growing up is always a weird search for identity and self-definition, it’s even harder when compounded by culture.

Now I happily identify as Chinese American, but for years, when filling out student loan applications, for example, and there’s a box for WHITE or ASIAN—I never knew which to select.

As a mixed-race friend once joked, “Just ask yourself, which parent do I love more today?”

L.L.: The seedier side of life is depicted….well, beautifully in this novel. There’s political and social unrest, the red-light district of Seattle, and even the selling of virginity. What kind of research did you embark upon for LOVE & OTHER CONSOLATION PRIZES?

Jamie Ford: As I was heading out on book tour, my publicist suggested, “You really should talk about your personal experiences as they relate to the novel.” Um…I don’t know how much time you’ve spent in brothels or what the mean average for brothel-time is in America, but whatever the average is, I can assure you I’m well below it.

However, I did find some amazing people to interview. One was a brilliant and charismatic woman named Maggie McNeil, who is an expert on Seattle’s historical red-light district and sex work in general. That’s because Maggie is both a librarian, and a high paid escort. She changed my perceptions of librarians and sex workers at the same time. [Image below: ‘World’s largest house of prostitution,’ Public Street in Seattle, WA; retrieved from]

L.L.: Similarly, how long does it take for you to write a solid draft of this breadth?

Jamie Ford: Ooooooohhh…tricky question. My knee-jerk reaction is it took too long. Which is my fault, really. I think three months for a draft is reasonable, but this one took a year, mainly because I was too self-conscious. With a first novel, there are no expectations, but after the success of both Hotel on the Corner of Bitter and Sweet, and Songs of Willow Frost, I was suddenly writing with the world looking over my shoulder. Not really, but certainly in my mind. It took a while to just get back to writing for the sake of writing.

L.L.: I liked the 1962 period of the story, too. Do you find you like working in this bifurcated narrative? Do you write in order, or all historical pieces at once then braid in the ‘present-day’ sections? What’s your method?

Jamie Ford:  I do love bouncing around I time, but I always write in a linear fashion—as the chapters flow in the book, regardless of time period, is the way it spills out of my brain. It might have been easier to write all of the 1909 chapters, then all of the 1962 scenes, and later weave them together, but for some reason the back and forth is more enjoyable in its construct.

I’m taking it further with the next book, which will be both historical and speculative. Wish me luck!

L.L.: I feel I could ask questions all day! What do you hope others take away from LOVE AND OTHER CONSOLATION PRIZES?

Jamie Ford: Hmmm…the takeaway. I guess I’d hope that readers appreciate the roles of women and how they’ve changed (or haven’t changed) from 1909 to the 60s and later today.

By that I mean, my grandmother was born at a time when women couldn’t vote. And one of the books I used for research was titled What Can a Woman Do? It was published in 1884, and the author was Mrs. M. L. Rayne—so the author couldn’t even write a book under her own name, it was her husband’s name on the cover.
So much has changed. But still, not nearly enough.

L.L.: What’s keeping you up at night? I’ll be honest, for me, it’s redecorating my writing space. I think it might help with the muse.

Jamie Ford:  My new book, honestly. It’s weirder, more ambitious, and more sprawling in scale than anything I’ve ever tackled. I’d tell you more about it, but then I’d be up all night, again.

L.L.: Jamie, it’s be such a pleasure! Is there anything I forgot to ask, but should have?

Jamie Ford:  You forgot to ask my go-to karaoke song? Seriously, everyone should have one. Mine would be anything that’s a duet—that’s the move—the have someone else to share the shame with. Aside from that, thanks for the interview, and to folks out there—thanks for reading!

For more information, to connect with the author via social media, or to purchase a copy of LOVE AND OTHER CONSOLATION  PRIZES, please see:

ABOUT THE AUTHOR: Jamie Ford’s debut novel, Hotel on the Corner of Bitter and Sweet, spent two years on the New York Times bestseller list and went on to win the Asian/Pacific American Award for Literature. His work has been translated into 35 languages. His latest novel, Love And Other Consolations Prizes was published September 12, 2017. [about image: One is me, one is my great-grandfather, Min Chung, who later changed his name to William Ford (long story…)]