Brilliant collection of intertwined/interconnected short stories about a suburban subdivision in the late 1970s/early 1980s.

An Amazon Best Book of the Month

Such a striking and brilliant collection of short stories from Canadian author Carrianne Leung. I absolutely adored THAT TIME I LOVED YOU (Liveright Publishing, February 2019), and felt a bit melancholy when it was over; I wanted to stay with these characters longer.

When I finished this collection, sat the book down, I said, “Five glorious stars,” and I don’t do that often. These stories are about children losing innocence, adults burying their pain. They start off with a ‘rash’ of parent suicides, one right after the other, in this new development, where everything appears ‘perfect.’ The characters are flawed but endearing. Leung’s prose is absolutely glimmering and lucid. I couldn’t get enough.

THAT TIME I LOVED YOU is a harrowing and stunning portrait of suburbia in that tender period of adolescence and new promise (the neighborhood is brand-new, heaps of dirt still remain in some of the yards, chain-link fences go up, but the paint is still fresh). The first story starts with the end, quite literally: it’s the year the parents in the neighborhood begin killing themselves.

“Heartbreaking…. Leung’s stories lift the veiled curtain of late 1970s suburbia to reveal the sadness and isolation of its residents…. Written in the tradition of Alice Munro and Jhumpa Lahiri, Leung’s debut story collection marks the career of a writer to watch.”
– Kirkus Reviews [starred review]

Each street in this Scarborough neighborhood is teeming with children and families of all races and cultures (Italian, Chinese, Jamaician)–our main protagonist is June, a Chinese-Canadian girl on the cusp of young adulthood.

We meet so many neighbors with various personalities and quirks–there’s a ‘lovely’ kleptomaniac, a new wife who dreams of a baby–but also the man next door—there’s the mother who swallows bleach and is found on her garage floor, the father who shoots himself with his hunting rifle.

Each story is a shift in POV, another look into a home, a different perspective on the suicides, and it’s so gorgeously done. THAT TIME I LOVED YOU is about moods and blistering desires, it’s about grief, and innocence, culture and class. This is one that deserves to be revisited time and time again. I loved it.

Please join me in welcoming the lovely and talented Carrianne Leung the to the author interview series.

Carrianne, I loved how you took these events with the parent suicides and wove them into this glorious collection of stories. There’s tension, logic, imagination, and so much forward momentum. What haunted you into writing this collection?

The stories began as a love letter to a particular time and place of my childhood. I felt like there was so much to say, so many stories to tell that haven’t been written about growing up in the suburbs from the point of view of a racialized child. The stories take place in the late 70s and early 80s which was an optimistic time in Canada. I remembered growing up a new subdivision in suburban Toronto, among many other new immigrants as an ambivalent time. Many of the issues we see today like racism, gendered violence, mental illness were present, but we didn’t have the language or understanding that we do now to discuss. I wanted to try to give language to those experiences in the sensibility of that period. Like a lot of young people, I longed to leave and find a bigger world, but when I revisited this childhood, I realized how much this place and time shaped me. The stories, while fictional, were my way of recording this memory.

Photo by David McBee on Pexels.com

What I really love is how the neighborhood in THAT TIME I LOVED YOU is so intricately connected–it’s a messy web of consequences of past mistakes, ideals, personalities. Can you give us a sense of where—and how—these characters were derived? Is there one or two you felt a particular affinity for?

As a child, I used to wonder what all my neighbours did behind the closed doors. Being new immigrants, my family and I were intrigued by how people who were not Chinese lived. The characters just came pretty fully formed. I guess they started as fragments of people I knew while growing up and grew from there. I love all of them! It would be like picking a favourite child! Haha. But I do feel that while these are linked stories, June is central. She has 3 stories – the beginning, the middle and the end, and only her stories are told in first person. I have a lot of affection for her.

Photo by Artem Beliaikin on Pexels.com

In terms of process, did you plan to create a novel-in-stories? Do you outline/plot, or did the characters sort of ‘take over?’ I’ve long yearned to create a similar collection—houses, homes, neighborhoods, the families that inhabit them have always intrigued. But I fear it wouldn’t hang together. Can you give us a some ‘nuts and bolts?’

I wrote the first story, “Grass” many years ago. It was published, but it lingered for me. I returned to it and considered developing it into a novel. However, so many other characters appeared, all jostling for space. They all needed their own stories to be told, and I followed their lead. While writing them, I found that they jumped into each other stories. It was a lot of fun to build. It wasn’t until I had a full draft of the book that I was able to polish and tighten how they were linked. I suppose my advice is to just write a full draft and then go back to see how the stories braid together. I believe so much of writing is in the revisions!

Photo by Engin Akyurt on Pexels.com

The end of each story sort of ends in motion, on the exhale. It feels like these characters keep moving and interacting, even after the last line. What compels you to know when you’re at ‘the end,’ of a certain story?

I wanted to show compassion for each of the characters, however flawed and messy they and their lives were. Each story ends in a way that I hope gives some kind of redemption to them. They do not wrap up with tidy endings, but I wanted to leave that for readers. We experience our lives as being “in the middle of things”, and that was the way I began and ended the stories.

The image of the streetlights turning on as night fell stayed with me throughout the writing of the book. When I was a child, this was the signal that I had to go inside. So I knew this was how I wanted to end the book.

Photo by Muffin on Pexels.com

How did growing up in Toronto influence the way you write, both formally and in content? Are there certain authors or works that have influenced your writing?

This is a great question! I am so inspired by what is happening in Canadian literature. I feel like I am in the company of such exciting work right now. I am lucky to live in a city that is very multi-racial and multilingual. I just googled how many languages are spoken here, and I found 200! This kind of diversity in race, gender identities, languages, etc. (and also the marginalization comes with difference) makes for a creative energy that I draw from. I am especially indebted to the work of Black, Indigenous writers and writers of colour for the inspiration and sense of building new representations of this place we call Canada. Among some of the fiction, non-fiction writers and poets who are especially important to me are David Chariandy, Catherine Hernandez, Katherena Vermette, Lindsay Wong, Jenny Heijun Wills, Alicia Elliot, Gwen Benaway, Cherie Dimaline, Canisia Lubrin… oh my goodness, I can go on and on. Now I fear I am forgetting a bunch of people! But please check out what is happening in the Canadian literary scene! It’s a very generative moment.

I have to ask about suicide, because it is a focus of the novel and not a light subject, but one I think people have an innate, somber curiosity about. There’s complicated grief for the survivors, but also someone who reads THAT TIME I LOVED YOU might also be struggling with their mental health. Can you speak to that, please?

I wanted to treat mental illness and suicide with compassion, respect and dignity. For people who have never experienced depression or suicide ideation, it may be unfathomable. As a child, I knew a few people who did commit suicide. You know, it’s a rupture of sorts for a child who may be hungry for the world to get larger, to feel alive with intensity to confront the reality that some people want to leave the world, to end their lives. I explored that in the book. What remains for the survivors? How do their perceptions and sense of self and stability necessarily shift in order to understand what has happened.

For those readers who are struggling, I hope that they get solace. I hope they do not feel alone. I hope they feel seen in some way and acknowledged that for many of us, the work of living is tremendously difficult. Within that, I hope they are also able to glimpse beauty.

Carrianne, I so enjoyed this. Thank you, thank you for the insight (and inspiration!). Is there anything you’d like to add, that maybe I forgot to ask?

I just want to thank you for reading the book, Leslie. It’s gratifying to hear from readers that they connected with the stories and the characters. I feel so much love for them, and it’s the greatest joy for a writer to know that others may care about them too.

For more information, to connnect with the Carrianne Leung via social media, or to purchase a copy of THAT TIME I LOVED YOU, please see:

ABOUT THE AUTHOR: Carrianne Leung is a fiction writer and educator. She holds a Ph.D. in Sociology and Equity Studies from OISE/University of Toronto. Her debut novel, The Wondrous Woo, published by Inanna Publications was shortlisted for the 2014 Toronto Book Awards. Her collection of linked stories, That Time I Loved You, was released in 2018 by HarperCollins and in 2019 in the US by Liveright Publishing. It received starred reviews from Kirkus Reviews, and was named as one of the Best Books of 2018 by CBC, That Time I Loved You was awarded the Danuta Gleed Literary Award 2019 and was shortlisted for the Toronto Book Awards 2019 and long listed for Canada Reads 2019. Leung’s work has also been appeared in The Puritan, Ricepaper, The Globe and Mail, Room Magazine, Prairie Fire and Open Book Ontario.

You can connect with me, Leslie Lindsay, via these social media channels: 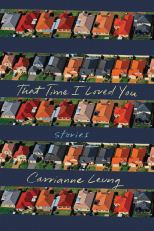