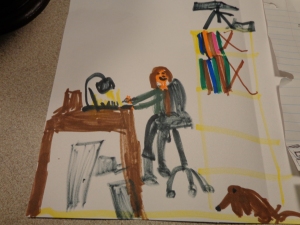 So I said, “Come with me…I want to get your opinion on something I wrote today. I need to know if it’s realistic 9-year old talk.”

She rolled her eyes and stared at me.

Reluctantly, she got off the couch. Grabbing her brownie, but leaving her milk behind, she followed me to the office where I opened up my document and began reading to her.

When I was finished, she said, “Yep. That’s pretty realistic. I could picture it all in my head.” She scampered off and headed to her own desk, a slanty artist’s table and said, “I’m gonna write, too.”

She took some printer paper from my office, folded it lengthwise and stapled, fashioning her own little book and then sauntered up to her desk wielding a pencil. I started on some edits.

“And how about castle?”

Again, I spelled the word.

“There aren’t. That’s how it’s spelled.” I am getting annoyed now. So much for trying to share a workspace with my 3rd grader.

Figures. I’m spelling every word that goes into her book.

“Yes, Kate? My story is about Cinderella on the Titanic.”

I roll my eyes. The kid’s been obsessed about the oceanliner since forever. “We’re learning about folktales at school right now. Did you know there are about 40 different versions of a Cinderella story?”

“I didn’t know that.” I am partially awed and annoyed.

“Well, now there’s 41 cause I added the Titanic version.”

“Mom! How do you spell marriage?”

I blow out a puff of air, an exaggerated sigh before praising her efforts then spell marriage.

And so I capture this exchange for several reasons:

1) My writing (and subsequent reading of) only inspired my daughter her to do the same on her own level. That’s a win.

2) Creativity is contagious. A little spark from someone else can create a fire within someone different.

3) Ideas and inspiration can be shared.

4) 3rd graders are decidedly less sophisticated than their adult counterparts when it comes to writing a story. And that’s probably the way it should be. However, life would be so much easier if authors just took a few pieces of paper, stapled them together, grabbed a pen, and began.

5) The apple doesn’t fall far from the tree. And what she creates may have some similar ingrediants, but it may result in an apple cobbler, pie, cake, bread, danish, applesauce, or just sliced with a schmear of peanut butter. No matter–it’s still her creation. And that’s what matters.

Happy Weekend, all!  Write something delicious.

Wanna read a series of fabulous, thought-provoking #essays about #writing, #home, #memory, #artifacts, more? YES, yes you do!
❄️Swipe ➡️to see the many (recent) faces of the gal behind the #booklove.
Does this speak to you in some way? Do you often feel you’re climbing to the top with all elements bearing down—the blaring sun, the unforgiving sea, the wind—and yet you #persist. The #growth happens when you #struggle.
❄️Hey all! Join me in my last #interview on Always with a Book with the lovely and talented #author @heathergudenkauf as she shares insight into her new book, THE OVERNIGHT GUEST.
❄️Want a fabulous #winterreading #bookrec? 👇
Happy Wednesday—at our house, the kids call it ‘peak of the week,’ 🏔 and you know what? I kinda like that.
Loading Comments...