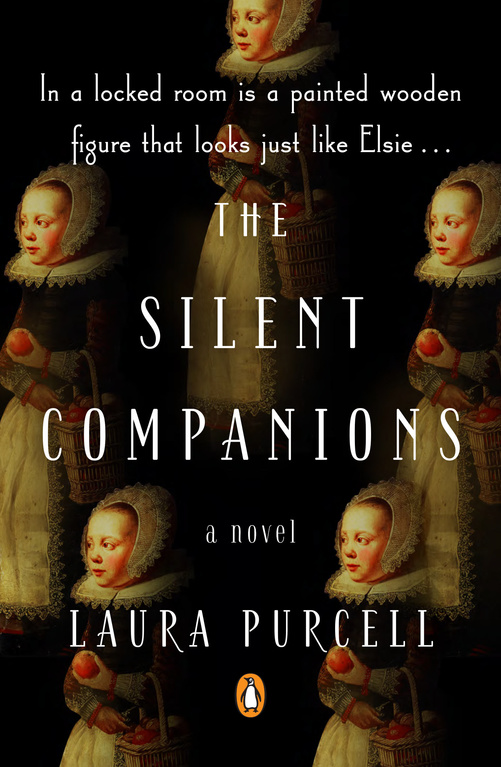 Already published to rave reviews in the U.K., Laura Purcell’s THE SILENT COMPANIONS (Penguin Books, Trade Paperback Original; on-sale March 6, 2018) is a mesmerizingly creepy Victorian Gothic that will have you staying up all night—and perhaps checking to make sure your door is locked!

When Elsie Livingstone marries Rupert Bainbridge, she is believed she is destined for a life of luxury. He’s handsome, a bit older than she, and quiet handsome. But he dies shortly into their marriage. Elsie finds she’s pregnant and alone in her late husband’s crumbling family estate Somewhere in England (near London, I assume).

The family estate is not very inviting. The servants are resentful and a little rough around the edges. The villagers are suspicious of the old place and feel it’s cursed; they refuse to work there. Elsie has only her deceased husband’s awkward female cousin, Sarah for companionship…or does she? Could there be other ‘companions’ inhabiting the home, too?

Told in alternating POVs and thus time periods, in addition to St. Joseph’s Hospital/the asylum, one gets a thrilling reading experience piecing these tales together.

Plus, the actual ‘companions,’ are a real historical artifact/antique I was unfamiliar with, leading me in search of more information. [They originated in Holland and were popular in 17th-century Europe]. Whenever a book propels me to do a little digging, I consider it a good read.

I loved the gloomy setting, the skittish maids, the old house, those locked doors, journals from the past…truly, this book packs quite a punch. The reading experience is a little slower than typical ghost stories and tales of suspense, but I think that has to do with the time periods being depicted. THE SILENT COMPANIONS is a fabulous read for a rainy night at home with a roaring fire.

So, join in welcoming Laura Purcell to the blog couch:

Leslie Lindsay: Laura, this tale blew me away! I had never heard of these ‘companions,’ the eerily lifelike wooden figures the were popular in 17th-century Europe. It seems like something one might uncover on “Antiques Roadshow,” but I don’t think I ever have. How did you discover them and was that the spark for the novel, or were your inspired by something else?

Laura Purcell: I’m so glad you find them as creepy as I do! I discovered ‘companions’ completely by chance, when a friend of mine was exploring a stately home. She sent me a picture of an antique wooden figure and asked if I knew what it was. I had no idea, but my immediate feeling was that the figure was unsettling. After some research, we discovered it was a dummy board, often called a ‘silent companion.’ They could be used as fire screens or elaborate practical jokes. Illusions and trickery played a large part in the entertainment of the upper classes in 17th century Holland, where they originated. Taking advantage of dark interiors, people would position candles to make the ‘companions’ appear real and surprise their friends.

I knew at once that I wanted to include such an unusual historical detail in one of my novels. But the ‘companions’ were so uncanny, it became clear that my story would need to be a scary one – which was  a brand new challenge for me! 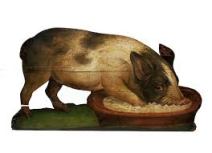 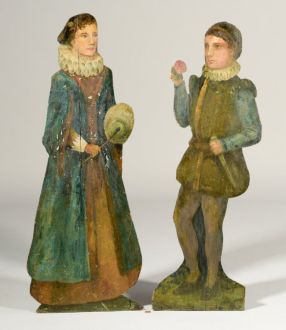 L.L.: The atmosphere in THE SILENT COMPANIONS is gloomy, dreary, and ominous. Parts of it reminded me of REBECCA—as in Bainbridge being slightly reminiscent of Manderly. It also reminded me of Shirley Jackson’s THE HAUNTING OF HILL HOUSE. And then, there were parts that had a CANTERBURY TALES feel. Maybe it were the 1635 sections that gave that impression. How did you determine the time periods you used in the book: 1865/66 and 1635? In a sense, it’s akin to a double-historical fiction. And was there a time period you enjoyed writing more than the other?

Laura Purcell: I absolutely love both REBECCA and THE HAUNTING OF HILL HOUSE, so I’m delighted to hear this!

Since THE SILENT COMPANIONS was my first ghost story, I was keen to set the main action in the Victorian era. It’s such a perfect period for tales of the supernatural. Firstly, you have a society where the mortality rate is high and there is an almost obsessive focus on funerals and mourning rituals. Then you have the rapid rate at which scientific invention was taking place. People were seeing steam engines and photographs for the first time. It must have seemed like magic. So the spiritual theories that developed seemed quite reasonable – if it had become possible to send messages by telegram, who was to say mediums could not knock a message to the dead? I was a bit more familiar with this [Victorian] period, so it was probably my favourite to write in.

But my Victorian heroine needed a ghost to haunt her. Since the ‘companions’ originated in the 17th century, I wanted the spooks to come from this time. Mid-century, we had huge upheaval in Britain with the English Civil War and various witchcraft trials, so this gave me a lot of material to work with.

Of course, I’d then set myself the huge task of writing these two interweaving stories in separate time periods – which wasn’t easy! 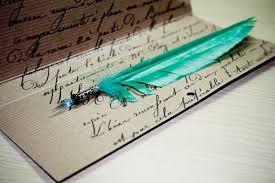 L.L.: Similarly, did you write in a linear fashion, that is, start to finish, or did you write certain sections (1635, 1865/66; and the asylum) bits separately and then splice them together?

Laura Purcell: It was really difficult to write. I plotted out how I wanted the stories to entwine but then I wrote each time line separately. My aim was to make sure each had its own distinctive ‘voice’ so that it wasn’t confusing when the reader switched time periods; they would know from the narrative style where they were. Once all the strands made sense on their own, I put them together and sharpened the links. Another task was cutting away in the right places: making sure the reveals from the past came at the right time, and that the pace of the book overall was building suitably.

L.L.: Do you ever ‘write yourself into corners,’ and how do you work yourself out?

Laura Purcell: I’m not sure that I do, I try to plan as thoroughly as possible in advance to avoid that situation. But I do have times when the writing is going badly, or just not flowing. The only way I’ve found to fix that is to push on through it.

L.L.: Can you tell us more about the house, The Bridge? Where, exactly is it located (I’m not sure it’s stated, but I could have missed it; I’m assuming outside of London). I’m fascinated with architecture.

Laura Purcell: It’s intentional that the location of The Bridge is never revealed. I wanted it to feel remote and off the map. I also didn’t want to limit myself geographically to certain types of foliage, wildlife etc. The village of Fayford and the town of Torbury St Jude are also entirely fictional.

The house is Jacobean in style and was once magnificent. By the time Elsie reaches it, decay has set in. I based the floorplan on a real stately home, but the outside was my creation, made up of the architectural details I liked best. At the heart of the mansion are its magnificent gardens, which become essential to the plot. 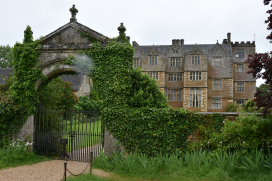 L.L.: I’m always, always interested in mental health/illness, too. I am intrigued with your depiction of Elsie’s mental issues, but also those of her mother-in-law. What research did you do in order to capture the time period in terms of women’s place in society and also the way women were treated in relation to their mind?

Laura Purcell: As Wilkie Collins highlighted in THE WOMAN IN WHITE, Victorians could commit their relations to private asylums with relative ease. Obviously there were people who genuinely needed help, but you do wonder how many were put away simply for convenience. Women in particular were at danger, as they were considered more nervous and unbalanced by nature. Rather than ‘embarrassing’ their families in society, they could be neatly hidden. Since repression and secrets are major themes for the novel, I felt the asylum needed to be in there.

My original view of Victorian asylums was that they must be grim, terrifying places, but research showed me attitudes were shifting. Even in Broadmoor, the institution for the criminally insane, treatments were becoming more humane, focusing on finding useful occupation for the patients rather than punishing treatments. I tried to convey this through my character Dr Shepherd, who is sympathetic to Elsie’s plight.

Elsie has endured genuine trauma. But it struck me that any woman acting erratically and claiming to see ghosts would arouse questions about her sanity. In this case, she has also suffered bereavement and is carrying a baby. These would be huge warning signs of ‘hysteria’ in the eyes of a Victorian man. 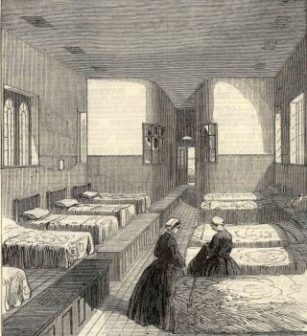 L.L.: What’s keeping you up at night? What’s obsessing you?

Laura Purcell: Not ghosts, luckily. I have some pretty tight deadlines at the moment, I worry about them.

L.L.: Are you working on anything new?

Laura Purcell: Always! My next book is called THE CORSET. It’s about a seamstress who claims to have a supernatural power to hurt people with the clothes she makes. And I also have something else Gothic in the pipeline … more to come!

L.L.: Laura, it’s been a pleasure. Is there anything I forgot to ask, but should have?

Laura Purcell: No, but thanks for having me!

For more information, to connect with the author via social media, or to purchase a copy of THE SILENT COMPANIONS, please visit:

ABOUT THE AUTHOR: Laura Purcell worked in local government, the financial industry, and a bookshop before becoming a full-time writer. She lives in Colchester, the oldest recorded town in England, with her husband. Fascinated by the darker side of royal history, Laura has also written two historical fiction novels about
the Hanoverian dynasty.

[Cover and author image courtesy of Penguin/Random House and used with permission. Image of exterior Broadmoor & women’s dormitories, 1867 courtesy of Reading Libraries via, image of firescreen dummy boards from, misty garden from; pig dummy board from, others from Pinterest and no source noted; image of Jacobean style home retrieved from , image of feathered pen from, UK paperback editions from L. Purcell’s website; all retrieved on 3.8.18]

Moody, gloomy snowmelt day...but we enjoyed being out and about regardless. There’s so much you can do #outside—#explore, #talk about what you see and hear, okay eye-spy, skip, hop, jump, practice #speech sounds/#phrases/#words, look for like objects, collect things. It’s really a speech-rich and bonding opportunity if you let it. #apraxiamonday tomorrow at ✨www.leslielindsay.com✨ featuring more ideas like this from betterSpeech.com
Here we are on the seam between winter and spring. I always find this juncture a little mystical. And there are lots of great books coming up. My focus this March is on historical fiction, but there’s one book that’s a bit of an outlier—it’s still historical in a sense—we’re recounting this pandemic we’ve all experienced in these essays. One year! Do you find that a little incredulous? I do.
I’m not sure if these little berries are coming or going...going, I think. Still, they speak to vitality and growth. Also? Trees and nature don’t ‘know’ what’s going on in the world. They just are. Be like nature.
📚WeekEND Reading: It doesn’t come out til July, but get this one on your radar. THE THERAPIST by @baparisauthor is sure to captivate and intrigue.
Sunshine, snowmelt, stroll. More than a stroll, actually. But you know, alliteration.
WeekEND Reading: Coming in Nay from @shewritespress by @nicolebokat THE HAPPINESS THIEF is about #guilt, buried #secrets, #trauma, more...a #mother’s #death, PTSD, more. ✨Stay tuned for author Q&A✨ Link in bio.