Linwood Barclay is here chatting about how writing is a job he loves (but words don’t get on the page unless you put in the time), how he’s readying for R&R in Prince Edward County, and his love for typewriters and model trains. 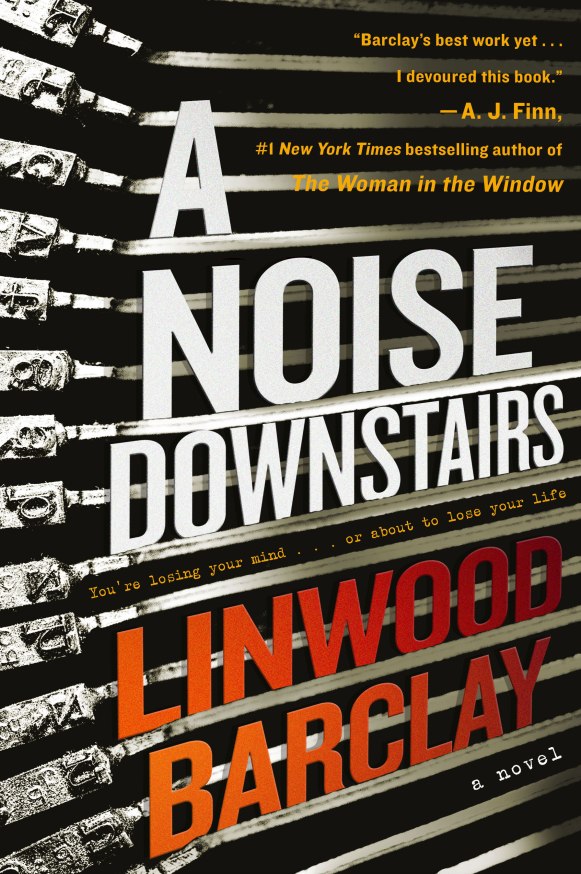 I’m so glad I’ve been introduced to Linwood Barclay. His writing is sharp, compelling, and addictive in similar vein of Harlan Coben meets David Bell meets Stephen King. A NOISE DOWNSTAIRS (William Morrow/HarperCollins 2018) is a fabulous thriller beach read that you can easily finish in a long afternoon because it’s so fast-paced and has all the makings of a terrific read: murder, an unreliable protagonist, and just when you think you have it all figured out…

College Professor Paul Davis seems to have it all: house on Long Island Sound, a second wife, a son, a teaching job at a local university. But when he spots a colleague out on the road late at night, his curiosity gets the better of him and he becomes victim /witness to a crime.

And now, eight months later, he’s still struggling with PTSD, anxiety, depression; he hasn’t returned to work. He thinks maybe he’ll write about the situation–a little catharsis couldn’t hurt, right. His wife, Charlotte, purchases a second-hand typewriter for him, but soon Paul is certain he can hear the machine late into the night? Or is it just his mind? His PTSD? An intruder?

Paul starts to question everything. And frankly, so too will the reader. A NOISE DOWNSTAIRS is at once menacing and creepy, but also a good whodunit-and-why; I thought I had it figured out (at least in part), and then new things were revealed, shifting theories. Personally, I love when that happens! This is the kind of read that gives you ‘waves’ of reveals, in that you let out a collective sigh only to be geared up again for yet another…thrill.

“A Noise Downstairs will astound, confound and thrill you. You’ll need to read it with your wits about you and you’ll want to sleep with your eyes open afterwards. A masterful novel.”

–Gilly Macmillan, author of What She Knew and The Perfect Girl

Leslie Lindsay: Thanks for popping by, Linwood. I tore through A NOISE DOWNSTAIRS because it’s so fast-paced, dark, and mysterious. Paul is being haunted by the typewriter, so I have to ask: what was haunting you as you set out to write?

Linwood Barclay: I think what haunted me as I started this book is what haunts me whenever I start writing a new novel: Can I do it again? And more than that, can I do it better? You want every book you write to be better than the one that came before, and sometimes you feel as though you’ve done it, and other times it’s, well, I don’t know. This time, I think I managed it, but readers will really be the ones to make that judgment.

L.L.: I have to say—typewriters! It seems they are becoming a ‘thing’ these days. Tom Hanks has a collection. You’re seeing them in antique stores, even I have a couple; and at the American Writer’s Museum [in Chicago], they even have a bank of old typewriters visitors can try their hand at typing. Do you have a fascination with them as well?

Linwood Barclay: I do love them. I love the look of them, the heft of them, the fact that while using one it will not connect you, within three seconds, to a funny cat video. I love the sound of them. I started in newspapers just before computers took over, and the sound of a newsroom tapping away is the sound of history being recorded. All that said, I still work on a computer. But when I was a kid, I asked my dad, when I was around nine or ten, to teach me how to use our old Royal, and received a three-minute lesson. That was the beginning of my banging out stories.

L.L.: :Paul is struggling with PTSD regarding an incident with a colleague. What kind of research did you have to do to get this part ‘right?’

Linwood Barclay:  I’m delighted that your question seems to suggest I did get this right, especially considering I did not spend a great deal of time researching the subject. Like most people, I’ve been through some difficult times (nothing to compare with what Paul went through, mind you). And like most writers, I made stuff up. But seriously, I worked hard to imagine myself in his position, how what had happened to him would haunt him, give him nightmares, change his perspective of the world around him. I’m hoping I’ve captured that.

L.L.: Can you tell us a little about your writing process, if you have any rituals or routines?

Linwood Barclay: I spent thirty years working in newspapers, so writing is very much a job to me. A job I love, but a job. You get up, have breakfast, make some coffee, and had upstairs to the study by 8 or 8:30, and the goal is to write two thousand words. If you can do that, you’ve got 10,000 words at the end of the week, and in two or three months, you’ve got a first draft. For half of my journalistic career, I was a columnist, writing three pieces a week. There was no calling your editor to say, “Gosh, the muse didn’t strike, so there won’t me a column tomorrow.” You produced. Those work habits are drilled into me. So, aside from the coffee, no real rituals. It’s just ass-in-chair and start typing.

L.L.: What’s on your to-do list this week? It doesn’t have to be literary…

Linwood Barclay: What a week to ask.  It’s nuts. I’m trying to finish the very rough, first draft of what might be the 2020 book, am putting together a presentation for some TV types for a series Entertainment One is developing, based on my PROMISE FALLS trilogy, writing a newsletter to let everyone know about my US and UK book tours that will take place the second half of April, reading Carsten Stroud’s terrific novel THE SHIMMER, taking allergy pills so I won’t get asthmatic when we look after our daughter’s dog while she moves, watching The Affair while asking myself why, why, why am I still watching this show when it went completely off the rails not last season, but the season before THAT, hoping to get to our place in Prince Edward County, Ontario, where I will sit on the dock and drink several vodkas with lemonade and contemplate whether this is the longest sentence I have ever written. (It’s not. There’s a sentence in A TAP ON THE WINDOW that’s longer.) And may I say, what a great question, which no one has ever asked before.

L.L.: Linwood, it’s been a pleasure. Is there anything I’ve forgotten to ask, but should have?

Linwood Barclay: Is it normal for a grown man to have an entire room in his basement dedicated to model trains? (I feel I’m too close to this to give an unbiased answer.)

For more information, to connect with the author via social media, or to purchase a copy of A NOISE DOWNSTAIRS, please see: 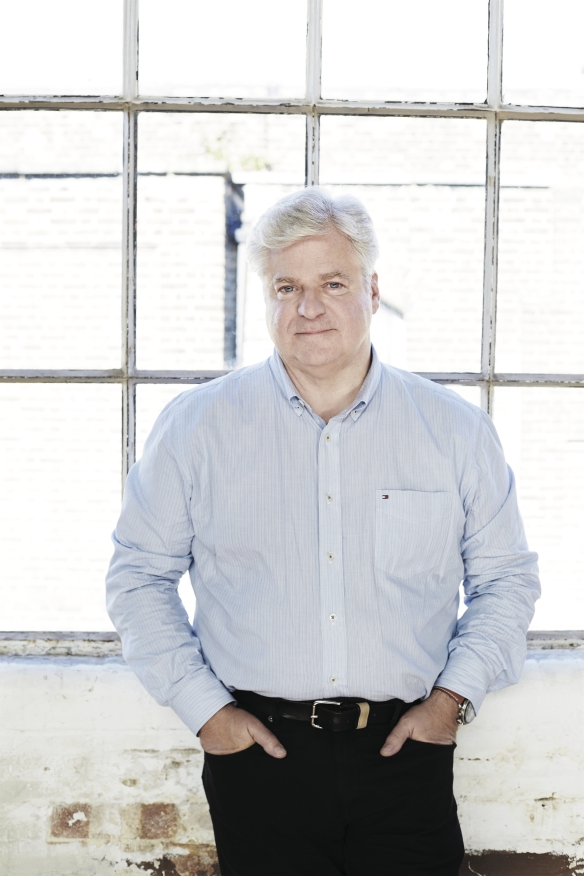 ABOUT THE AUTHOR: Linwood Barclay is the author of seventeen previous novels and two thrillers for children, including the international bestseller NO TIME FOR GOODBYE. A New York Times bestselling author, his books have been translated into more than two dozen languages. He wrote a screenplay adaptation for his novel NEVER SAW IT COMING and his book THE ACCIDENT has been made into a television series in France. A native of Connecticut, he lives near Toronto with his wife, Neetha. 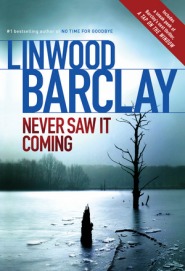 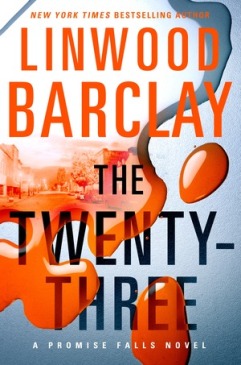 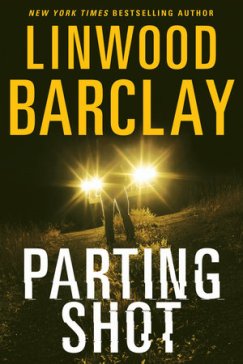 [Cover and author image courtesy of HarperCollins/WilliamMorrow and used with permission. Other Barclay cover images retrieved from author’s website, 6.27.18]