Highly inventive, charming tale about a young woman, her criminal father, a love for animals and how animals are sometimes part of our destiny. 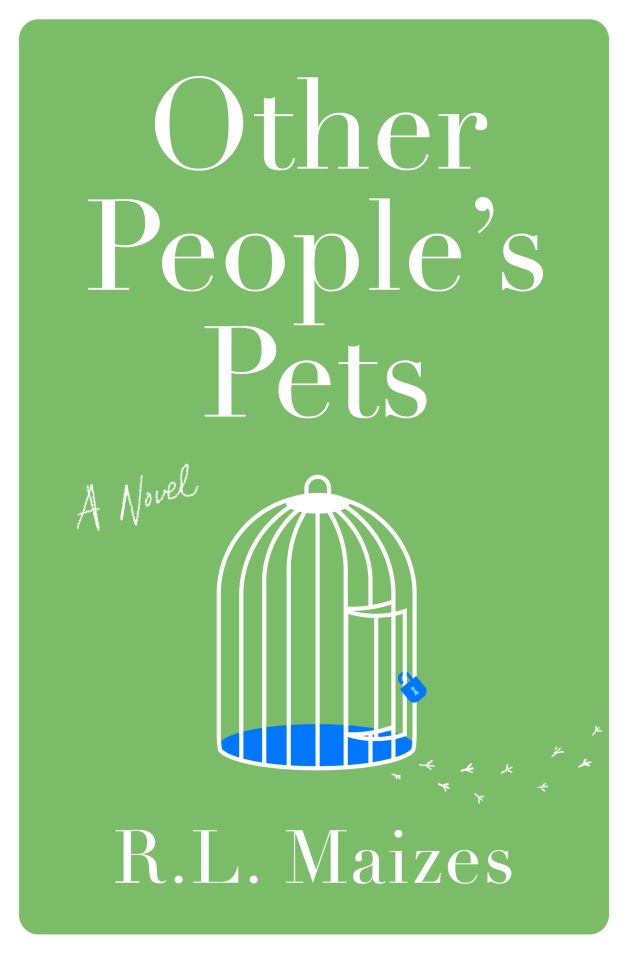 Charmingly off-beat and slightly quirky, OTHER PEOPLE’S PETS by R.L. Maizes, a Pushcart Prize-nominated author, (Celadon, July 14 2020) is told with such wonder, such sparse–yet focused–details, I couldn’t help by empathize with the situations Maizes constructs in her story.

La La (Louise) Fine is a fourth year vet student and she relates to four-legged creatures more than the human ones–the only exception being perhaps her father, Zev. Having been abandoned by her mother as a young child, La La grew up with a single dad who was a locksmith turned thief. She went along with him on his “jobs,” and tended to the animals, stood as the watch-out, and often left treats for the animals. But that’s all in her past.

Now, she has a promising career as a vet, an adoring fiancé, and she’s mostly come to terms with her mother. But then Zev is arrested for burglary–maybe murder, too–and she has to help. The legal fees are piling up and so she resorts to the only thing she knows.

Maizes writes with such a delightful hand, injecting wonder and charm into the most flawed characters. I found the plot and writing style so original and inventive and yet, there was tension on every page.

La La is an animal empath; she can sense physical and emotional ailments of nearly every animal. I found this fascinating and could relate with her tender-hearted regard for all creatures.

OTHER PEOPLE’S PETS is about how our past shapes our future, claiming one’s chosen family, and ultimately doing what’s right. It’s a bit about maternal abandonment and loss, but also about a strong father-daughter bond.

Please join me in welcoming the lovely and talented R.L. Maizes to the author interview series.

Welcome, welcome! What a sweet story. I mean, it’s full of tension and not-so-good things, but the way you tell it, it’s so full and delightful. It had me thinking about all the animals I have loved over the years. Can you tell us what inspired the story?

Dogs and cats have always enriched my life, and I worry about how our society treats certain animals, so I was intrigued by the idea of writing about a character who could feel what animals feel. I liked the challenge of imagining what day to day life would be like for her. As far writing about burglaries, my house was burglarized numerous times when I was young, once when I was home. That made a strong impression on me, and I was curious to get into the mind of a burglar while researching and writing the book.

Photo by Binyamin Mellish on Pexels.com

Zev and La La are burglars. It’s kind of weird saying, “Oh yeah…this book, it’s really good. The father and daughter are thieves but it’s so delightful.” Never once did I find Zev or La La unlikable. Quite the opposite. I empathized with them. I worried for them. Can you tell us how these characters were developed?

Once I made the main characters burglars, I knew I had to give them redeeming features, too, so the reader would care about them. In La La’s case, her love for her father and for animals, and the way she tries to take care of both, makes her a character who is easy to care about. Having been abandoned by her mother, she’s even more sympathetic. Zev, too, tries his best to take care of La La as a single dad—though he often falls short—and that inspires the reader to care about him. He also had a rough childhood, which explains why he’s chosen a life of crime, and might soften the reader’s judgment of him.

There are some darker truths to OTHER PEOPLE’S PETS, about La La and her mother. Her mother was a person who felt like she never should have been a parent. An accident happens and then the fall-out causes the mother to leave Zev and La La. How my heart ached. My own relationship with my late mother was tumultuous and estranged—and so I felt for La La. How did this theme of abandonment come into the story for you? In some ways, it dovetails nicely with rescued pets.

My father was often absent, so I know the pain of having a missing parent. I wanted to examine the impact that being abandoned has on La La, to see whether and what kind of healing was possible for her. My mother died suddenly when I was an adult and that was a very tough loss for me, too. I suppose I was exploring some of my feelings about that loss in the book, though my mother doted on her children and was nothing like La La’s mother. Perhaps my sympathy for abandoned animals grows in part from having experienced losses of my own.

Photo by Helena Lopes on Pexels.com

La La is an animal empath; she literally feels the physical and emotional pain an animal is experiencing. I’m curious if this phenomenon actually exists and what you can tell us about it and also, it lends a bit to magical realism as a genre. Was that intended, or did it sort of grow organically?

I don’t know if the phenomenon actually exists. I once saw a television show about an animal communicator who said she understood what animals were feeling emotionally and could communicate with them. But that’s different than La La’s ability to experience an animal’s physical sensations in her own body. I discovered La La’s ability as I was writing about her and realized I’d be writing magical realism. It’s a genre I love, so I was very happy to pursue it.

Photo by Johannes Plenio on Pexels.com

What’s a ‘good’ writing day look like to you? Do you have any rituals or routines, plotter or pantser? What element of the craft do you think you do particularly well? What do you struggle with?

I try to write for three or four hours in the morning and an hour or two in the afternoon. I’m a pantser until I have a first draft and then I do an outline where I work out problems in the book, things like dropped plots and insufficient character development, before going on to the next draft. I find describing emotions challenging because the first description that enters my mind is always a cliché, and the second and third descriptions are, too. So I have to work hard to get beyond those clichés to come up with fresh descriptions. I’ve been told I’m good at writing dialogue and it doesn’t seem as big a struggle for me as certain other craft elements.

What three things can you not stop talking or thinking about? It doesn’t have to be literary.

Thank you so much for this; I so enjoyed. Is there anything I should have asked, but may have forgotten?

You would never ask this because you’re too polite, but I want to tell your readers that I’m 57 years old and that this is my first novel. I want people to know that with regard to most accomplishments, age is only a barrier if you allow it to be.

Artistic image of cover designed and photographed by Leslie Lindsay. Join her on Instagram for more like this @leslielindsay1 #alwayswithabook.

For more information, to connect with R.L. Maizes via social media, or to purchase a copy of OTHER PEOPLE’S PETS, please visit:

Last year, I was completely charmed by Hazel Prior’s debut, ELLIE AND THE HARPMAKER and I think the writing style and unique themes will resonate with OTHER PEOPLE’S PETS.

R.L. MAIZES is the author of the short story collection We Love Anderson Cooper (Celadon Books). Her novel, OTHER PEOPLE’S PETS (Celadon Books), is forthcoming July 14, 2020. Her stories have aired on National Public Radio and have appeared in Electric Literature’s Recommended Reading. Her essays have been published in The New York Times, The Washington Post, and have aired on NPR.

Maizes was born and raised in Queens, New York, and lives in Boulder County, CO, with her husband, Steve, and her muses: Arie, a cat who was dropped in the animal shelter’s night box like an overdue library book, and Rosie, a dog who spent her first year homeless in South Dakota and thinks Colorado is downright balmy.

Leslie Lindsay is the award-winning author of SPEAKING OF APRAXIA (Woodbine House, 2012) and former Mayo Clinic child/adolescent psychiatric R.N.. Her work has been published in Pithead Chapel, Common Ground Review, Cleaver Magazine (craft and CNF), The Awakenings Review, The Nervous Breakdown, Ruminate’s The Waking, Brave Voices Literary Magazine, Manifest-Station, and others. Her cover art will be featured on Up the Staircase Quarterly in May 2020, other photography in Another Chicago Magazine (ACM) and Brushfire Literature & Arts Journal; poetry in the Coffin Bell Journal, and CNF in Semicolon Literary Magazine; the 2nd edition of SPEAKING OF APRAXIA will be available late this summer. Leslie has been awarded one of the top 1% reviewers on GoodReads and recognized by Jane Friedman as one of the most influential book reviewers. Since 2013, Leslie has interviewed over 700 bestselling and debut authors on her author interview series. Follow her bookstagram posts @leslielindsay1.

[Cover and author image courtesy of Dewey Decimal Media and used with permission. Artistic image of cover designed and photographed by Leslie Lindsay. Join her on Instagram for more like this @leslielindsay1 #alwayswithabook]

📚WeekEND Reading: It doesn’t come out til July, but get this one on your radar. THE THERAPIST by @baparisauthor is sure to captivate and intrigue.
Sunshine, snowmelt, stroll. More than a stroll, actually. But you know, alliteration.
WeekEND Reading: Coming in Nay from @shewritespress by @nicolebokat THE HAPPINESS THIEF is about #guilt, buried #secrets, #trauma, more...a #mother’s #death, PTSD, more. ✨Stay tuned for author Q&A✨ Link in bio.
It’s the last weekend ❄️of February with temps predicted near-50 and that’s pretty darn warm for the Chicago area. What are your plans for the weekend?
Throwback Thursday: I have such a clear memory—not if this moment—but of this kitchen. My mom re-did the whole place...cabinets and countertops, backsplash. I recall the basket our napkins sat in, the apple-shaped cutting board that was rarely used because she preferred the white plastic one with hundreds of gashes. The valance over the window she designed and sewed herself...I think we were baking sugar cookies using my grandmother’s delicious recipe, which I still love. My mom had a lot of good about her, but she was also a very mercurial person. She always struggled with #anxiety and #depression, and when I was 10 1/2, she devolved into acute #psychosis, terrifying my father and me. She was hospitalized more times than I can count, the marriage did not survive for myriad reasons (not just mental health issues). We had a very tumultuous relationship after all of that and then were #estranged. We tried, though. Her moods would improve. We connected over the phone or through letters. Once, after more than 20 years, she came to my home. 18 months later, she was found in her home, dead. That was nearly 6 years ago now. My #memoir on this story is currently on submission with editors. I feel so strongly that it needs to find a home—I think so many could relate and grow from this tragic event.
We’re about to turn the page from winter to ‘calendar spring,’ even though in some parts, it still feels (and looks) much like winter. Still, I’m hopeful for more sunlight, warmer temperatures, and the sweet sound of birds.