A deeply moving and stirring collection of poems about houses and homes inspired by Gaston Bachelard’s 1958 classic, THE POETICS OF SPACE. 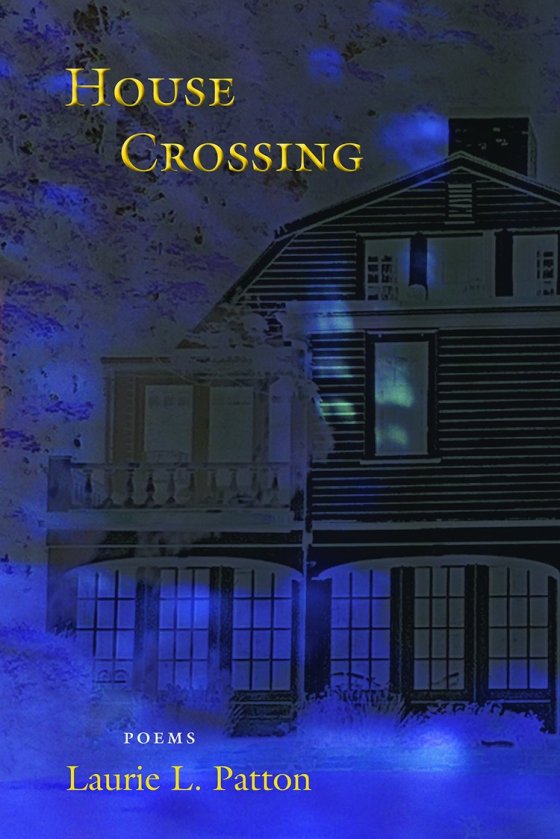 Houses, homes, dwellings…they all have a mystical experience for me. They may be composed of timber and hardware, plaster and bricks and glass, but they hold truths deeper and darker still.

A house may live only once, but it encompasses many lives.

HOUSE CROSSING (Station Hill, May 2018) is a “simple poetry of houses,” as author Laurie Patton says. Ultimately, she was inspired by the “geometry of intimacy” in urbane, basic architecture–a corner, the end of a hallway, a window, the attic. While the 32 short poems in the collection are a study in brevity, they pack such a soft-focused punch, going deep and leaving the reader with a disquieting contemplation.

Titles are simple, but oh how they had me swooning: eaves, cupola, well, demolition, grave.

I don’t mean to be glib when I say these poems are haunting. Patton’s work dwells in the white space, the what-might-have-been. One reads the words and imagines a scene, but then the mind takes over and sees an intimate potential that may vary person to person. Within these works, Patton observes the structure and design in a home which often leads to order. Or disorder. And her writing is done with a melancholic tenderness I found quite profound and disarming.

This collection truly spoke to me and encouraged–inspired–me to read more, to write even more–and to seek out Gaston Bachelard’s book.

Laurie is the president of Middlebury College in Vermont. She’s also the author or editor of ten books in the history and culture of Indian religions, mythology, and theory. Ultimately, she’s a scholar. And I am so honored to welcome her to the author interview series.

Laurie, I am swooning over this collection! I understand HOUSE CROSSING arose from your fascination of Gaston Bachelard’s 1958 work, THE POETICS OF SPACE, specifically, how it’s been a touchstone for architects, designers, poets, psychologists, and more since it’s publication sixty years ago. Can you tell us more about your inspiration?

I’m so glad you like the work. I read Gaston Bachelard in graduate school in the late 80’s and early 90’s, when reading a phenomenologist of the imagination from the 50’s wasn’t exactly fashionable. I fell in love with his works, but didn’t admit to reading them much because we were supposed to be reading Foucault, Deleuze, and Derrida. It was kind of a guilty pleasure.

And yet, as Raine Daston and Sharon Marcus argued at a conference they just hosted at Columbia, there are such things as “undead texts”—texts that stay with you no matter what, and through the vicissitudes of intellectual fashion. While I knew that Gaston Bachelard’s work couldn’t be “proper philosophy” in a post-modern age, it could still be inspirational. I think it is a brave, and good, and deeply poetic thing to write about how the shapes of space structure the imagination—particularly domestic space. His work felt intuitively true to me; that memories of corners and ceilings do shape us in some profound way—perhaps expressible only in poetry.

I also love the fact that before he wrote these daring works, he was a philosopher of objectivity and science, and before that, he was a mailman. He personifies the interconnectedness of knowledge to me.

Photo by Jessica Lewis on Pexels.com

Can you take us through the timeline of writing HOUSE CROSSING? I noticed some of the poems have been published in anthologies or journals prior to their appearance in the collection. Were they written sporadically as the muse called, or was there a more sequential approach?

My two earlier books of poems also follow a structure: Fire’s Goal: Poems from a Hindu Year follows the structure of Hindu holidays and festivals in a single year. There, the writing discipline was to walk through a memory from one of my years in India that wouldn’t leave my mind, and assume that the memory’s persistence was a kind of call to write a poem. Angel’s Task: Poems in Biblical Time follows the readings from the Jewish calendar year. There, I focused on a single verse or line that seized my imagination and wrote a response in the form of a poem. Each project was guided by a kind of meditative discipline.

The writing of House Crossing was somewhat similar in that, inspired by Bachelard, I had very clear memories of parts of houses—memories that were in some way constitutive of the way I approached space. They weren’t necessarily childhood memories, nor were they necessarily houses I had lived in for a long time.  Wherever I drew the memory from, the architectural image provided the structure for the book, just as the ritual year did in my two previous books.

That said, it was a difficult thing initially for me to write the poems in a secular idiom; a house is not the same as a ritual year and my niche was definitely poetry inspired by a religious tradition. However, many of my readers think that House Crossing is still an intensely spiritual book—even more than the previous two! I think there’s a chord that could strike anyone who has lived in a house and has come to understand it as a home. I’m enjoying the fact that it has a wider readership than the others.

Photo by rovenimages.com on Pexels.com

In the introduction of HOUSE CROSSING, you indicate these poems are not exactly about you or one house in particular, but memories and vestiges of personal history. But there’s a clear arc to them as well…we start in the cellar and end with grave; kind of an earth to earth, circular formation. Can you talk about that, please?

You’re absolutely right to see that. I struggled with the order of the poems, and decided in the end simply to publish them in the order in which I wrote them. After I had gathered them all together, the order seemed to have an organic sense to it.  I also realized that the poems at the end of the work were increasingly about things outside of a house, such as “Roof”, “Well,” and “Grave.”  It was almost as if I were taking leave of the project by writing of architectural elements more and more “outside” the house.

Because the poems involve personal history, they also could be written, and interpreted, in a nostalgic manner. We all have our favorite corner, or hallway. But to move beyond sentimentality, I tried to make the places both specific and non-specific. A cellar was indeed a particular cellar, but it could be anyone’s cellar. A good poem makes something compellingly universal out of something particular, and I hope that I achieved that with architectural images.

“House Crossing, Laurie Patton’s mediation on space, builds a home in what it means to be between houses. The architecture of her poems is sound and beautiful, making spaces full of light, a place to live.”

Was there a poem that caused much fear and worry for you? For instance, what made the pads of your fingers sweat and your heart to race?

That’s an insightful question. The “Well” poem was perhaps the hardest to write, because it was a record of a dream sequence I kept having, of encountering women enclosed in spaces—closets, graves, shallow pools.  I had originally written it in my head as a kind of long poem with much more elaborate images.  But in the end it emerged as a briefer poem, even though the images remained intact and much the same as they occurred in the dreams.  I am never sure about whether narrating a dream sequence in a poem can ever become truly accessible to readers. So I sweated that one! I anticipated something much grander, but the poem turned out rather simple.

I was also anxious about members of my family reading the poems, given that they might recognize some of the imagery. Both mother and father appear frequently in the book. Siblings do too. They are all somewhat fictionalized. Colm Tóibín has a wonderful essay about writers and their families, and he describes one conversation between himself and his mother where books are imagined as kinds of weapons. I worried about that. I’m delighted to report that all is well on that score; apparently the poems have moved even those who appear as characters in them.

They are the holders

What might you tell a writer (or poet) who wishes to write about home? In other words, what question did you set out to answer, and did you find it?

I think the most important thing we can learn in writing about this subject is the difference between a shelter and a dwelling place—or, as some might put it, a house and a home. A shelter is of intellectual interest, and perhaps could pique our curiosity about its design. But a dwelling place is something alive, creative.  A dwelling place is also populated by actual and imagined relationships. It is an immensely social space, even when there is no one there.

What gets you out of bed in the mornings? And it doesn’t have to be literary.

I am intensely interested in the relationship between the poet and society. Every day I try to answer this question: how can poetry change the world? How can metaphors help people see and act differently? I carry with me Adrienne Rich’s essays on poetry and commitment, and Robert Pinsky’s on democracy, culture, and the voice of poetry, and dip into them every now and then throughout the day. 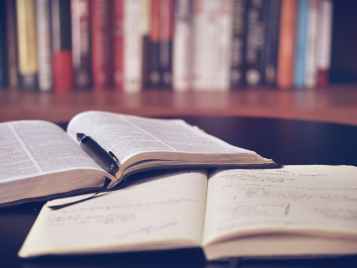 Is there anything I should have asked, but may have forgotten?

You forgot to ask me how I write given my day job. That’s immensely refreshing.

For more information, to connect with the author via social media, or to purchase a copy of HOUSE CROSSING, please visit:

ABOUT THE AUTHOR: Laurie L. Patton is the 17th president of Middlebury and the first woman to lead the institution in its 218-year history.

Patton is a leading authority on South Asian history and culture, and the author or editor of 11 books in these fields. She has also translated the ancient Hindu text, The Bhagavad Gita, for Penguin Classics Series, and is the author of three books of poetry—the most recent book, House Crossing, was published in May 2018.

Patton is a native New Englander. She grew up in Danvers, Massachusetts, and graduated from Choate Rosemary Hall in 1979. Patton and her husband, Shalom Goldman, the Pardon Tillinghast Professor of History, Philosophy, and Religion in the Department of Religion at Middlebury College, reside in the President’s House at 3 South Street.

❄️Want a fabulous #winterreading #bookrec? 👇
Happy Wednesday—at our house, the kids call it ‘peak of the week,’ 🏔 and you know what? I kinda like that.
Are you familiar with @tin_house’s #podcast 🎧BETWEEN THE COVERS with @dnaimon? I mean, it’s fabulous! 👇
🗣EMOTIONAL INHERITANCE: A Therapist, Her Patients & The Legacy of Trauma @littlebrownspark @galit_atlas is out today and it’s so very good.
❄️You know what this is?! This is everything I love—well, almost. It doesn’t represent my love for #houses/#homes, #nature, #exercise, my #family…or #bassets…a good blanket or cookies, but it’s pretty close. What this represents: my favorite colors. Design. #Books. #Writing. #Creating.
🎉Do you have a copy?!
Loading Comments...