Haunting actual photograph spurs McMorris to pen a tale cast during the Great Depression about desperation, love, loss, and ambition in SOLD ON A MONDAY. Kristina McMorris is here today chatting about the inspiration behind the book, mental illness, single motherhood, health care, and more…and how those topics are not just today’s worries, but they transcend time. 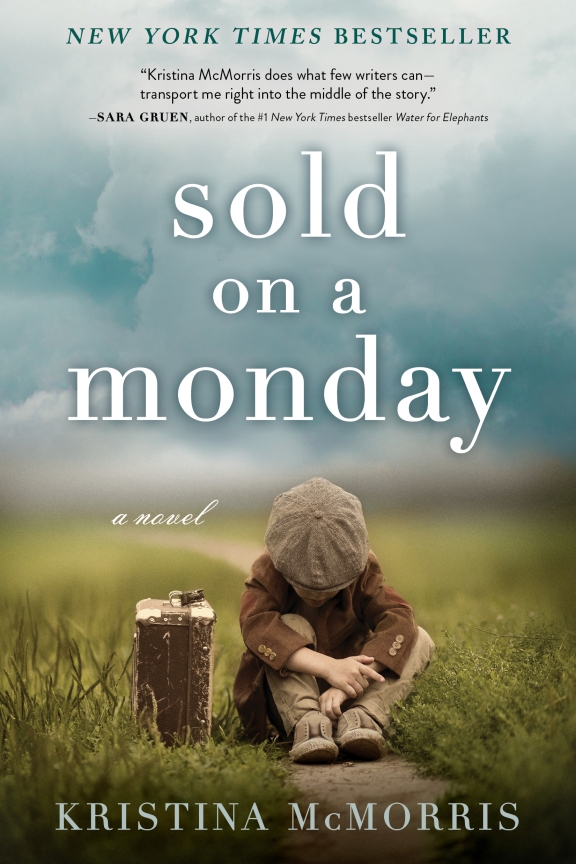 It’s 1931 and Ellis Reed is a journalist working hard to get the big scoop on local (Philadelphia) stories. He’s killing time one afternoon when he stumbles across a pair of siblings on a farmhouse porch with a sign nearby:

Stunned, he snaps a photo, and with the help of newspaper secretary. Lillian Palmer, they craft a story to go with the photograph. It’s a feature and national attention is drawn to the tale…after all, it’s the depression and folks are drawn to stories of desperation.

BUT. Might that photo have been staged? What about journalist integrity?

McMorris does a fabulous job of placing me smack in the middle of the story. And the cover is absolutely gorgeously arresting–plus, my own grandfather was ‘sold’ during this period in history. The man who ‘purchased’ him decided he no longer wanted my grandfather when he learned the boy had lice. Heartbreaking as that is, I wanted to learn more about what that experience might have been like.

While SOLD ON A MONDAY is tangentially about the effects on children during the Depression, the narrative hinges on family secrets, grief, illness, and so much more; McMorris weaves a gentle hand of mystery, intrigue, and devastating consequences, but ending with tears and redemption.

Please join me in welcoming Kristina McMorris to the author interview series.

Kristina, I am so honored to have you. This story touched me for several reasons, but mostly I was drawn to my own devastating family history that my grandfather was proffered for sale as a boy. He couldn’t talk about it without tearing up (understandably), and it always haunted me, much like the photograph you discovered prompting your interest in this story. Can you talk more about that, please?

Leslie, I’m thrilled to know the book touched you, especially on such a personal level. As a mother myself, it’s so hard to wrap my mind around heartbreaking stories like your grandfather’s. So, yes, you’re absolutely right about the photo that haunted me. When I stumbled across the newspaper photo, first published in 1948 in Indiana, featuring four children being offered for sale from their own apartment stoop in Chicago, I had a visceral reaction. I understood a mother perhaps giving up her children in hopes of giving them a better life, but I truly couldn’t comprehend asking for money in return.

Eventually I did some research about the photo. I ended up finding a follow-up article about the kids, now adults, and how several of them had been reunited after decades of being separated. Their stories of being sold as farm labor (for as low as $2!) was absolutely heart-wrenching—so much so, I wasn’t sure I could actually write a novel centered on an experience like that. But then… I discovered a brief mention in that same article—a stunning claim—that involved the reporter who took the original photo. To prevent giving too much away to your readers here, I’ll just say that it suddenly changed my perspective of the picture, and I knew the story I needed to tell. 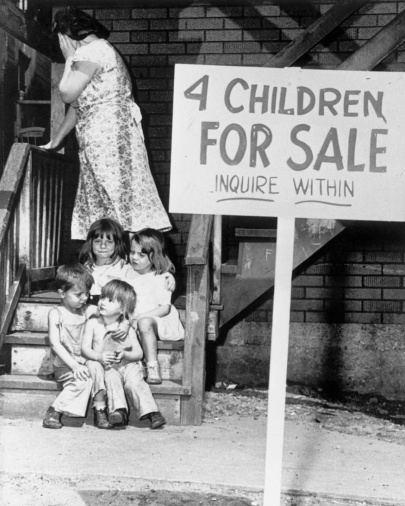 I understand, too, that you began writing about the 1930s and 40s when you discovered a collection of your grandparents’ WWII courtship letters, ultimately inspiring your debut novel, LETTERS FROM HOME. Do you have any tips or advice on how writers can mine their own family history to propel a literary narrative without making it ‘too personal?’

Well, for writers looking to create stories that are distanced from their own family histories, I’d suggest that they first figure out their one-sentence “hook.” In other words, their quick, powerful elevator pitch polished and ready for Spielberg! From there, they can use their central premise as a jumping off point and let their imaginations take over. Along the way, I think there are always great opportunities to sprinkle in personal accounts that really help bring the fictional characters and plot to life.

What was your research like for SOLD ON A MONDAY? There are a lot of prohibition-era facts woven throughout, but also journalism, the overall time period, etc. What was your process like?

Fortunately, I’d already researched the era quite a bit for my previous novel, The Edge of Lost (which, by the way, even features a few familiar characters from Sold on a Monday!). For the journalistic aspects, I relied mostly on memoirs from old-time reporters who had incredible stories to tell, as well as newspaper and reporter friends who generously read my early pages with an eye for accuracy. I was also lucky enough to able to draw from my own experiences in the newsroom, since I literally grew up in one. From ages nine to fourteen, I hosted a kids’ weekly TV show for an ABC affiliate station, so spent countless hours watching the hustle and bustle of the news world. A decade later, I even interned at the same station and became a contributing freelance writer for a monthly magazine. All that said, it was amazing to observe how much has changed in the industry over the years, but also how much still remains the same. 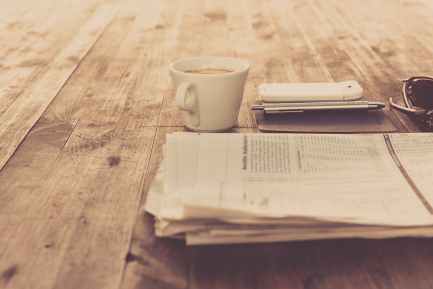 What did you learn while writing SOLD ON A MONDAY? Was it what you expected you’d discover, or did something else present itself?

I think what surprised me most was how much of my story relates to current-day hot topics. While I did realize during the writing of the book that truth in journalism was going to be relevant, I honestly hadn’t intended to touch upon other subjects like… poverty, affordable healthcare, separation of families, mental illness, and even challenges of single motherhood and women in the workplace. It was only after the book was published and readers brought all of these up to me that I became fully aware of how much these issues transcend time. I suppose it’s one more reason books are so important, in that they can help people talk about the tougher subjects and, hopefully, work toward finding solutions together.

What’s next for you? Are you working on something new? Any obsessions…and it doesn’t have to be literary.

I do have a new idea I’m pretty excited about, another historical (not a surprise!). But since I’m still chipping away at a 50-stop book tour, I’m afraid it will be a little while before I can make significant progress. In the meantime, I can at least share that my sons have said that, if the kids in Sold on a Monday are anything like them, the sequel should definitely be titled Returned on a Tuesday. Naturally followed by Rented on a Wednesday and Leased on a Thursday. (Yes, they think they’re pretty clever!)

Photo by Fancycrave.com on Pexels.com

Kristina, it’s been such a pleasure. Is there anything I should have asked, but may have forgotten?

Thanks so much for having me, Leslie! For readers who happen to be in a book club, or just love 1930s recipes and music playlists, I hope they’ll take a peek at my website, where there are all kinds of fun themed features for readers. And since I have events set all the way into June, I hope they’ll check out my schedule and come out and meet me if they’re in any of the areas!

For more information, to connect with the author via social media, or to purchase a copy of SOLD ON A MONDAY, please visit: 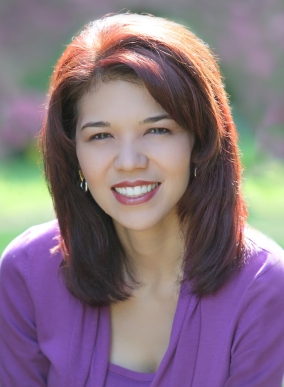 ABOUT THE AUTHOR: Kristina McMorris is the author of five historical novels, including the New York Times and USA Today bestsellers Sold on a Monday and The Edge of Lost. To date, her works of fiction have garnered more than two dozen literary awards and nominations. Prior to her writing career, she owned a wedding- and event-planning company until she had far surpassed her limit of YMCA- and chicken dances. She also worked as a PR director of an international conglomerate, as well as a weekly TV-show host for Warner Bros. and an ABC affiliate, beginning at age nine with an Emmy Award-winning program. She lives in Oregon with her husband and their two sons, ages twelve and fifteen going on forty. 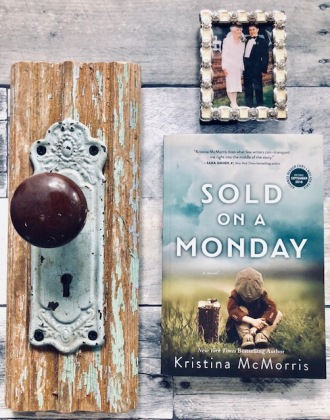 [Cover and author image courtesy of Sourcebooks and used with permission. Above artistic image created by L. Lindsay. Note photo of grandfather. Please find more like this at Instagram @LeslieLindsay1. 1948 historical photo that inspired author, retrieved from on 11.17.18]