I am just thrilled to have Sarah Cornwell debut author of WHAT I HAD BEFORE I HAD YOU. Mothers. Daughters. Family bonds. Throw in a little bipolar and psychic action and I’m so there. A writer myself, these are often themes and questions I love to explore in my own writing, but they are tough subjects! 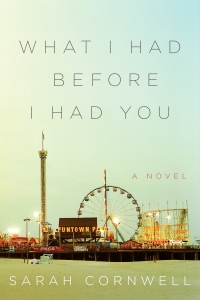 Be sure to enter for the Give-a-way copy of this lovely book!* Sarah and HarperCollins has graciously provided one copy up for grabs for TWO different readers. All you gotta do is share via social media, or comment on the blog. Let me know you shared** by dropping me an email at leslie_lindsay@hotmail.com. Okay…and now with the interview!

Leslie Lindsay: What can you tell us about the type of research you drew upon to create such a compellingly honest composition?

Sarah Cornwell: Thank you for that description! So much of the research that goes into my writing is simply lived life—observing people, pocketing details, taking on odd jobs that might grant some deeper access. For a while as I finished this book I worked part-time as a research interviewer for a psych study, interviewing mother-daughter pairs about their mental health and emotional lives—what a perfect research job that was! I steer my life toward my subject matter; I went to a range of psychics as I wrote this book, for example, to better understand how Myla might present herself in that part of her life.

For the first few years of the ten that I spent, on and off, writing this book, I had no idea that bipolar disorder would play a part in the story. Myla emerged first as a mercurial, passionate, unreliable mom with a carefully guarded past (though not the past she ended up with in the final draft!) and Olivia as a sheltered teenager experiencing an accelerated adolescence. Once I saw that their moods and behaviors pointed to a family history of bipolar disorder, I let it color the story, and then I began research to make sure I rendered that illness accurately. Concerning early onset bipolar disorder, I found much of value in ‘The Bipolar Child,’ by Demitri Papolos M.D. and Janice Papolos. I read many memoirs concerning adult and adolescent experiences of bipolar disorder, and I was grateful for candid conversations with friends with the bipolar diagnosis as well as with mental health professionals. Before publication, I had a child psychiatrist fact-check the manuscript.

L.L.: Okay—full disclosure, I am the daughter of a bipolar mother. She was no picnic to live with; even as an adult daughter I struggle with her. Do you have any personal connection to bipolar?

Sarah Cornwell:Thank you for sharing that. Some of the most meaningful responses I’ve received to the book have been from people who have bipolar disorder or who have bipolar family members. It is the highest compliment to hear that Olivia’s perspective is resonating in this personal way for readers. I am the daughter of a therapist, so I grew up very familiar with mental health issues, and I’ve always been fascinated with the mind—with the variations in how we think and perceive that make us who we are. I come from a family with its own legacy of mental health issues, both diagnosed and undiagnosed (don’t we all!)

L.L.: I find it so very creepy that Olivia has to clean the nursery of her stillborn twin sisters many years after their, uh…birth. How did you dream up this scenario? Is it part of the mother’s bipolar that commands this, or is it grief? Something Olivia senses her mother needs?

Sarah Cornwell: This was one of the very first moments, or series of mental images, from which the book sprang: the nursery, the enforced relationship between living and dead siblings. My own mother had several miscarriages before my birth, and I remember wondering, as a child, whether those were brothers and sisters I’d never know, or just myself, trying again and again to exist. This thought was the seed of the book, and when I sat down to express it, the nursery tumbled out fully formed, a physical expression of that tension between ghost and child.

The ritual of cleaning the nursery is something that Myla needs in order to keep Olivia feeling connected to her invisible sisters, as a priest might ask religious believers to make offerings in a temple—to make a daily show of faith in the unseen, and so to reinforce that faith. It is Myla asking Olivia to support and participate in her delusion—a big responsibility for a child, once she begins to realize the things her mother has told her are not entirely reliable…

L.L.: You write so eloquently about mothers and children, so I have to ask—do you have children of your own?

Sarah Cornwell: Thank you! I do not, but I’m looking forward to it!

L.L.: Psychics have long been a topic that fascinate and bemuse me. In some ways I feel there’s a little psychic action driving the beast under our writerly pursuits. How did this piece drift into your novel?

Sarah Cornwell: This story is so much about the space between what is real and what is unreal. Psychic ability falls into this space for me—I want to believe in it, and other people promise they have seen convincing proof, yet I have not. I am fascinated by that sort of fundamentally human longing for magical explanations for life’s mysteries. The mind is a meaning-making machine; it will sew up holes and ignore fuzzy logic in order to see what it wants to see. As I wrote this book, Myla’s psychic ability bled together with her bipolar disorder in a way that felt meaningful—her unique and special powers come only with the destructive force of her mania. Whether or not you believe, as you read, that she truly has psychic powers, it’s that wedding of identity and talent to unmedicated mania that interested me—she believes in her powers because they make her who she is, and they make her bipolar disorder a source of strength, whereas many people in her early life treated her as a compromised person (as you find out through revelations that come late in the book!)

L.L.: Moving on to the craft of writing, can you give us a glimpse into a typical writing day for you?

Sarah Cornwell: I work best in the morning after a good night’s sleep. Beyond that, I’m completely inconsistent! I don’t write every day, and I’m always irked by the blanket statements you’ll hear that every writer must—we’re all different and we conjure different magic through different means!

My days vary quite a bit depending on where I am in a project, and depending on the form in which I’m writing. Right now, for instance, I am working exclusively on screenwriting projects and I’m under deadline, so I often spend a good four or five hour chunk in a coffee shop in the morning (where the presence of other people working hard keeps me honest), go home for lunch, and spend the rest of the day trying desperately to reach that morning-session level of productivity, failing, forgiving myself, and then cooking dinner. Rinse and repeat.

When I am brainstorming or outlining, though (which I only do preliminarily in screenwriting—in fiction I outline only when I’m already deeply into a project) my days often consist of wandering around, staring out windows, doing other jobs, puttering, complaining… I’ll spend a whole day like that, feeling miserably unproductive, and then a lightbulb will blink on and I’ll realize that I was working that whole time, in a back burner kind of way, and that I’ve accomplished a very necessary step. It has taken me years to get comfortable with handing the reins over to the unconscious part of my mind in that way. And even though I know now that it’s an indispensable part of my process, it’s always uncomfortable.

L.L.: Many of our readers are interested in agents. Can you shed a little light into the agent-getting game, what you felt you did right—and maybe some pointers as to how you would do it differently?

Sarah Cornwell: I didn’t reach out to agents until my novel was finished, in 2012, nine years after I started it and two years after it served as my graduate thesis at UT-Austin’s Michener Center for Writers. I knew that thesis draft wasn’t the best I could do (in fact the missing puzzle piece ended up being the whole present-tense timeline, which flowed out of me in months once that particular lightbulb blinked on). By the time I did turn out a draft I felt satisfied with, I had a few agents checking in routinely, who had reached out to me after reading my short fiction in literary magazines, and I had recommendations of good agent matches from writing mentors I met in graduate school. These connections are so valuable, and not in a shmoozy way—I hate shmoozy—it’s about finding allies and mentors in your own education as a writer, however you go about it, and then sharing resources so that writing you love and respect can find its audience.

I believe strongly in waiting until a piece of writing is as good as I can possibly make it before asking an agent or an editor to invest their time in it, and I think that philosophy served me well. I chose two agents to submit the manuscript to and picked the one whose vision for selling it felt right to me.

L.L.:What’s next? Will we be hearing more from you in the future?

Sarah Cornwell: Right now I am having a great time getting things up and running in my Hollywood screenwriting career. My first movie will be produced this summer by David S. Goyer, a horror movie called THE FOREST. Next, I am adapting Jennifer Percy’s amazing work of nonfiction, ‘Demon Camp,’ into a supernatural thriller for Paramount Pictures. I hope to start another novel within the next year.

Bio: Sarah Cornwell grew up in Narberth, Pennsylvania. Her debut novel, What I Had Before I Had You, was published by HarperCollins in January 2014, and received starred reviews from Publishers Weekly and Booklist. Her fiction has appeared or is forthcoming in publications including the 2013 Pushcart Prize Anthology, The Missouri Review, Mid-American Review, Gulf Coast, Hunger Mountain, and Alaska Quarterly Review, and has been honored with a Pushcart Prize, the 2008 Gulf Coast Fiction Prize, and finalist honors for the Keene Prize for Literature. In 2010, her screenwriting was recognized with the Humanitas Student Drama Fellowship. A former Michener Fellow at UT-Austin, Sara was the Spring 2012 Writer-in-Residence at Interlochen Arts Academy and a 2011 Mid-Atlantic Arts Foundation Creative Fellow for Pennsylvania State. Sarah has worked as an investigator of police misconduct, a writer in the schools, an MCAT tutor, a psychological research interviewer, a toy seller, and a screenwriter. She lives in Los Angeles.

**The Fine Print for Giveaway: Two hardcover copies of WHAT I HAD BEFORE I HAD YOU are being provided by HarperCollins, one for each of 2 winners. Contest runs from today, 4.23.14 thru Wednesday 4.30.14. You must share this link via social media of your choice and then email “I shared” to leslie_lindsay@hotmail to be entered in giveaway. Your name will be selected at random on 4.23.14. You will be contacted via email if you are the winner; please check your junk/spam folder for notification. Books will be mailed to you by HarperCollins. Please be patient while you await the arrival of your complimentary book. Good luck!