Piercingly observant, timely and oh-so-topical, Amy Impellizzeri shares this essay about her new release, WHY WE LIE, combining social media, politics, and the workplace culture.

Everyone lies.
The real surprise is WHY…

I’ve been a fan of Amy’s work since her debut, LEMONGRASS HOPE (2014) and like anyone who practices her craft, Amy gets better and better with every book. She is seriously talented, with jaw-dropping twists, turns, and complex characters. Her new book, WHY WE LIE (available March 5th from Wyatt-Mackenzie) is so timely, so topical, and so…intricate. Today, she’s sharing this lovely personal essay about her experience with working as an attorney in D.C. in the 1990s.

Featured in Publisher’s Weekly and garnering rave reviews like this one from Hank Phillippi Ryan, Nationally Best-selling author of TRUST ME:

“Amy Impellizzeri is incredibly talented! She turns the truth topsy-turvy in this sinister and surprising tale of greed, politics, and power. Timely and thought-provoking—this is exactly what psychological suspense is meant to be. A winner in every way.”

First a bit about WHY WE LIE:

Rising star politician and lawyer, Jude Birch, is clearly keeping secrets about his past from his wife, Aby Boyle. And Aby worries that Jude’s relationship with his campaign manager, Laila Rogers, is more complicated than he has let on. Jude has been the apparent bystander victim of a seemingly gang-related shooting, but as the secrets Jude and Laila have kept since law school begin to unravel – with the help of a zealous news reporter and the Capitol Police – Aby is forced to consider that Jude might not have been an unintended victim of the shooting after all.

Meanwhile, as Jude receives a bizarre post-shooting diagnosis revealing that his brain is healing in such a way that he can no longer lie, Aby worries about her own secret past coming to light. Her past is marked by abuse and lies, and even a false accusation that still haunts her.

Unpredictable, unexpected, and startlingly timely, WHY WE LIE examines the real life consequences of those who tell the truth and those who lie, and asks the question: is the truth always worth the cost?

From Monica to #Metoo – Two Decades of D.C. Lies that Inspired My Latest Novel

I lived and worked in Washington D.C. in the mid to late 1990’s. At the same time Monica Lewinsky was interning at the White House, I was a young lawyer in our nation’s capital. I walked by the White House often, sometimes catching a view of press conferences in the Rose Garden. I have always been awestruck by the business of D.C., but never more so than in those years when I was a small part of it.

After graduating law school from D.C.’s George Washington National Law Center, I started my law career as a clerk for the U.S. Court of Federal Clams, the court in which claims against the government are brought and defended. However naïve it might sound, I felt very much in the epicenter of the legal and political world back then, and I loved every minute of my time there. I had amazing mentors, colleagues, and experiences in D.C.

I always joke that I left D.C. kicking and screaming. My then fiancé (now husband) hated D.C. and convinced me to move back with him to New York, where I eventually landed a coveted position at one of the most well-respected law firms in the country, Skadden Arps. When the Clinton-Lewinsky scandal broke, I remember thinking, “It was all happening in D.C. while I was there” as if I had been somehow personally affected by the time and place connection. It was jarring to think that the world I’d once been part of and loved  – even tangentially – could have been so corrupt without me even knowing it.

In the early 2000’s, I traveled to the D.C. office of my NYC-based firm – Skadden Arps – for a document review. One of the D.C. associates giving me a tour of the office waved his arm toward the 11th floor conference room as we passed it by. “That’s where the deposition took place,” he stage whispered comically. The deposition he was referring to was the one in which then President Bill Clinton famously lied about his relationship with Monica Lewinsky. By the early 2000’s, it was clear that one person had told the truth and one had told lies, and it was also clear that the scandal had produced winners and losers. Monica was essentially run out of the country and Bill Clinton was now living in New York completely unscathed. It was also clear to me personally by then that truth-telling was not a universally lauded virtue in the legal world.

I started my law career an idealistic young lawyer. The law was my tool to change the world slowly. At the Court of Federal Claims and in my early years of practice, I was mentored by and worked alongside some of the brightest and hard-working lawyers I’ve ever met. I loved the practice of law, and truth be told, I loved lawyers. We were the “good guys” and I loved being on their side. As my law career unfolded over the next 13 years, however, the cases became more high profile, the workload became more unmanageable, the lines between truth and lies blurred and shifted over and over again; so too did the lines between who were the “good guys” and the “bad guys”. I spoke up repeatedly about some abuses that bothered me, some that even targeted me. But the culture of BigLaw was complicated and my voice was often stifled there. After 13 years of practice, I left the law in 2010 and found a more practical avenue for my voice and for slow change– fiction.

Much later, in 2017, the emergence of the #metoo movement – a social media driven campaign to essentially out bullies and predators – had an effect not just on the bullies, but on victims themselves. I watched as many re-considered their own dysfunctional professional relationships under a new lens. Monica Lewinsky wrote an article that was published in Vanity Fair in early 2018: “Monica Lewinsky: Emerging from “The House of Gaslight” in the Age of #MeToo” in which she looked back on events from two decades earlier and called “what transpired between Bill Clinton and myself” “ a gross abuse of power.”

“The road that led there was littered with inappropriate abuse of authority, station and privilege. (Full stop.)”

In the 2018 Vanity Fair Article, Monica talked too about the isolation and aloneness she felt – having made mistakes, yes, but also having very little support on the public stage. She lauded the #metoo movement as providing a “new avenue toward the safety that comes with solidarity.”

When I read that piece, I was finishing up a novel that I’d been working on for years that addresses, among other topics, a culture of abuse of authority in the legal and political realm and the aloneness and isolation of its victims. WHY WE LIE has been noted by Publisher’s Weekly and early reviewers as an important part of the #metoo conversation, but that conversation had not yet begun when I started the novel. And indeed, as Monica Lewinsky’s trajectory illustrates, the political and legal sectors continue to be slow to join the table of the #metoo discussion.

WHY WE LIE is a novel that is two decades in the making for me personally. I call it a “non-partisan political novel” because, while it may be tempting at first to call it a commentary on the contemporary political climate today, in fact, it’s a look at the reality that for decades, powerful men have been given a pass at bad behavior and women are often the victims of those passes.

I’ve noticed in particular that women lawyers are conspicuously absent still from the #metoo discussion, and I know why. In the law and in politics, truth telling is not rewarded. Among other legacies, the Clinton-Lewinsky scandal has shown us that simple fact, no? My personal experience confirms it to be true. I got the idea to begin WHY WE LIE with a diagnosis that has the rising star politician and former lawyer recovering from brain surgery, and now unable to lie. And yet, rather than come as a relief to his wife, she is terrified of the consequences of this new condition.

WHY WE LIE tells the story of a modern day and totally fictional political campaign, and exposes the truth of many people connected to that campaign, including a too-good-to-be-true politician, his wife of many secrets, a possibly nefarious campaign manager, and several corporate donors playing high stakes poker with a campaign they care nothing about, to force their adversaries to give up the thing they love most: profits. It’s a book of lies. And in the end, a revelation that, in fact, everyone lies. That’s no surprise.

The real surprise is why. And in the case of those who lie because truth-telling is simply too big a risk, this novel asks if maybe, just maybe, that is ok.

For more information, to connect with the author via social media, or to purchase a copy of WHY WE LIE, please see:

ABOUT THE AUTHOR: Amy Impellizzeri is a reformed corporate litigator, former start-up exec, and award-winning author. After spending a decade at one of the top law firms in the country, Amy left to advocate for working women, eventually landing at a VC-backed start-up company, Hybrid Her (named by ForbesWoman as a top website for women in 2010 and 2011), while writing her first novel, LEMONGRASS HOPE (Wyatt-MacKenzie 2014), named a 2014 INDIEFAB Book of the Year Bronze Winner (Romance). Her sophomore novel, SECRETS OF WORRY DOLLS was released on December 1, 2016, and was an Editor’s Pick in Foreword Reviews Magazine.
Amy’s third novel, THE TRUTH ABOUT THEA, released in October 2017 and was an inaugural pick for Francis Ford Coppola Winery’s Book & Bottles. Amy’s newest novel, WHY WE LIE, is releasing March 5, 2019.

Amy’s first non-fiction book, LAWYER INTERRUPTED, was published by the American Bar Association in May 2015 and has been featured in TheAtlantic.com, Above the Law, ABC27, and more.

Amy is a Tall Poppy Writer, Past President of the Women’s Fiction Writers Association, and a contributor to She is Fierce! and Women Writers, Women’s Books. Amy’s essays and articles have appeared in The Huffington Post, The Glass Hammer, Divine Caroline, ABA’s Law Practice Today, and Skirt! Magazine, among more.

Amy currently lives in rural Pennsylvania where she works and plays and keeps up on all of the latest research confirming that large volumes of coffee are indeed good for you. 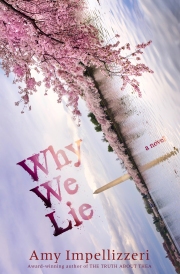 Amy Impellizzeri | WHY WE LIE: https://leslielindsay.com/2019/03/08/amy-impellizzeri-shares-this-personal-essay-on-her-non-partisan-political-novel-why-we-lie-the-metoo-movement-more

[Cover and author images courtesy of A. Impellizzeri and used with permissionl. Other book covers retrieved from author’s website on 2.14.19]

3 thoughts on “Amy Impellizzeri shares this personal essay on her ‘non-partisan political novel,’ WHY WE LIE, the #metoo movement, & more”