An excerpt from “Speaking of Apraxia:  A Parent’s Guide to Childhood Apraxia of Speech” (Woodbine House, March 2012).

So What Caused All of This?

You’d like to blame someone, anyone, for the misfortunate combination of luck and biology that lead to your child having Childhood Apraxia of Speech. But chances are, there is nothing or no one who can take the blame. There is a lot of conflicting information out there about what causes CAS. To date, the professionals can’t agree on a cause—but there are lots of theories. I am certainly no expert in CAS theory, so if you really have an interest in this topic, I urge you to seek out additional resources.

The Nuts and Bolts of This Chapter

Of course, you are wondering why your little one has CAS. As mentioned before, CAS is a relatively “new” diagnosis (not used for children until the 1960s) and much research is still going on. In fact, some practitioners and researchers will say that we are still at “square one” in identifying this disorder. There are no clear-cut answers as to what caused your child to have CAS.

But there are theories—several of them. Some theorists believe that CAS is based on underlying language issues. Others believe that the brain isn’t formulating and sending the correct “message” to the muscles involved in speech. Still others think that children with CAS have problems listening to and interpreting speech. Those who are genetic experts point out that CAS runs in families–that members may have a history of apraxia, another speech concern (late- talking or stuttering for example), or other learning differences. Recent research findings point toward this genetic perspective.

Looking for more?! Then, it may be time to order a copy of “Speaking of Apraxia.”  You can order it directly from the publisher, Woodbine House, Inc. at www.woodbinehouse.com or thru www.Amazon.com and www.barnesandnoble.com. 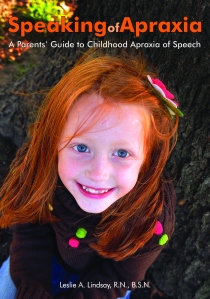